Nick Niziolek, Co-CIO at the TAMIM Global Equity Growth IMA's partner Calamos Investments, has spent considerable time over the past few years tracking the growth catalysts in emerging markets. In this article Nick takes time to delve into the factors he believes have driven emerging markets and the factors that will continue to drive them into 2017. While caution is always warranted when reviewing emerging markets, we continue to believe this segment of the market provides strong investment opportunities for the next 12 months.
This material is distributed for informational purposes only. The information contained herein is based on internal research derived from various sources and does not purport to be statements of all material facts relating to the information mentioned, and while not guaranteed as to the accuracy or completeness, has been obtained from sources we believe to be reliable.
Tracking the Growth Catalysts in Emerging Markets
Nick Niziolek, Calamos Investments
- 2016 -

The following is based on remarks made on August 30, 2016.
The majority of the improved outlook and positive returns we’ve seen year to date in emerging markets equities has been driven by external forces (i.e., stability in developed-market foreign exchange rates), which has provided demand for higher-yielding emerging market assets. However, we also see an inflection point in many countries that provide a fundamental narrative to an EM recovery.

While the emerging markets rally year to date has been skewed toward fundamentally weaker economies, we are beginning to see countries that we believe to be further along in reforms and fundamentally more sound begin to outperform. A lower interest rate, lower growth, stable dollar environment has the potential to persist, we believe. Such an environment may provide weaker markets time to implement reforms and a tailwind for those further along in the process.

​The easing of the U.S. dollar appreciation and stabilization in global commodity markets have provided a supportive backdrop for emerging markets (Figures 1 and 2). 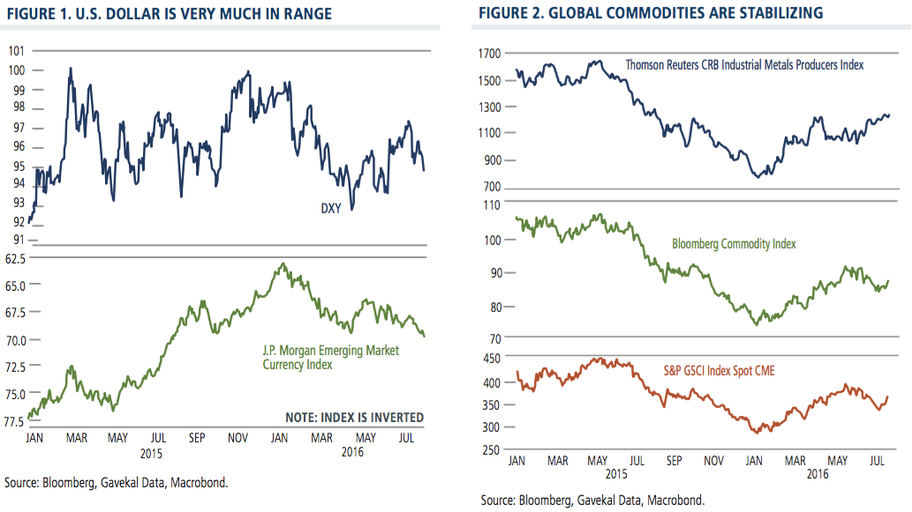 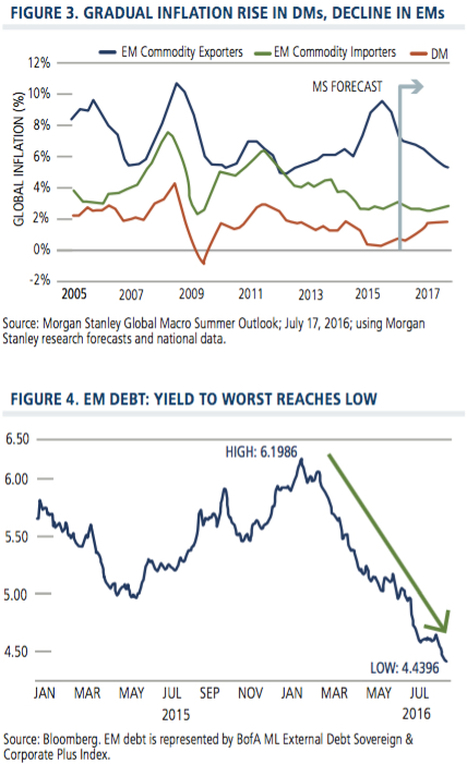 With inflation falling and capital  flowing back into emerging markets, we’ve seen a steady march down in EM debt yields (Figure 4). This both lowers the cost of funding for these markets and supports a higher multiple.

While we would not suggest that growth in EM is about to accelerate broadly as global growth remains muted, data is confirming that a bottoming may have occurred near-term. Figure 5 compares Purchasing Manager Indices of emerging and developed markets. Historically, the indices tracked each other very closely but diverged in recent years. We are starting to see that relationship converge again, albeit at weak levels (Figure 5).

The situation has improved for both commodity importers and exporters, which should provide more stability to their currencies if and when rates begin to normalize (Figure 6).

At this point, the fundamental narrative still feels heavily influenced by developed market forces, but it is worth noting the improvement we have seen. Given more time, these economies can continue to adjust and provide a more sustainable platform for future growth. 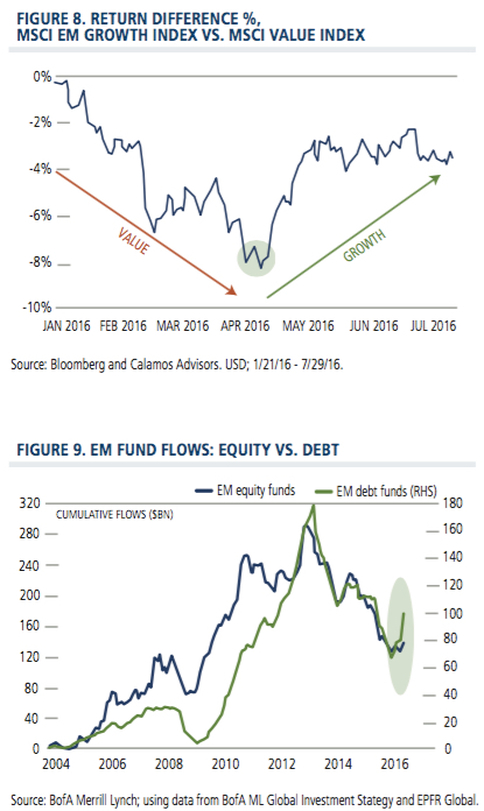 2016 EM Performance
Following the mid-January low in emerging markets, the initial rally was driven by a pickup in the value vs. growth trade and energy and commodity companies in lower-quality countries. Three of the most fundamentally weak countries led the rally— Brazil, Russia and South Africa (Figure 7).

But as the year has progressed, investors are returning to higher-quality growth. While Brazil has continued to outperform year to date, Russia and South Africa have begun to slightly underperform the index. Thailand, India and Indonesia have begun to outperform. This is not atypical of an emerging markets recovery with so much capital moving in and out of the market via ETFs. We believe fundamentals will begin to matter more (Figure 8).

Flows into emerging markets funds have turned up (Figure 9). Of particular note,  flows into EM equity have been positive year to date while flows into developed markets have been negative. As reported in the Calamos EM Snapshot, fund flows and performance tend to move in tandem and when there’s a change in direction, it’s often a multiple year trend. The last time we saw this was from 2009 through 2012, when emerging markets outperformed and saw stronger flows than developed markets (Figure 10, next page). 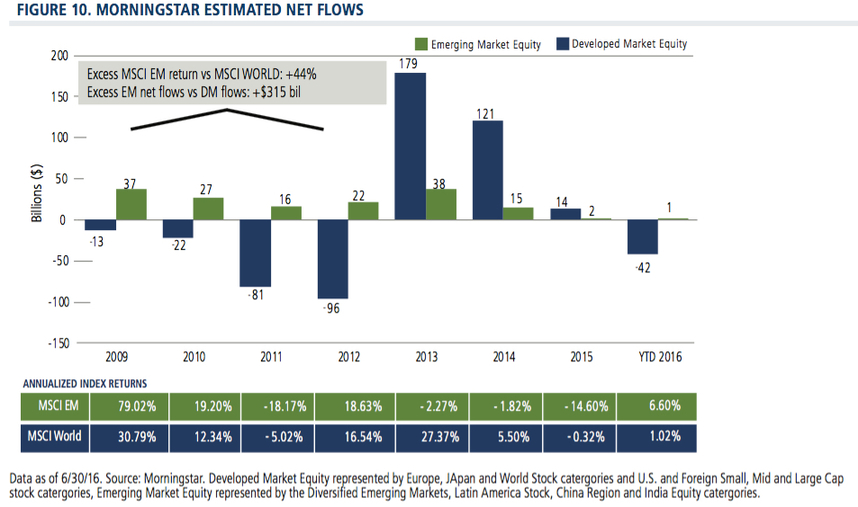 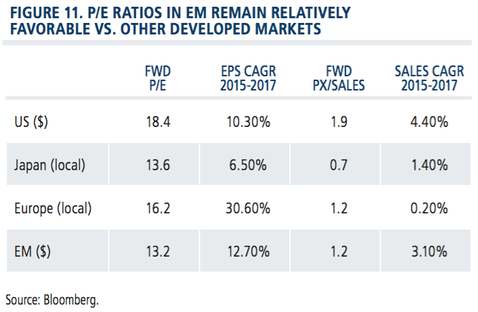 However, as an asset class, EM equities are still very under-owned today. We expect this to change as investors begin to rebalance away from the strong returns they’ve seen in developed markets equities.

Expectations for earnings and sales growth of emerging markets over the next two years are near what’s expected of U.S. equity markets, yet EMs continue to trade at a two-thirds multiple of the U.S. market (Figure 11).

The recent improvement we have seen in return on equity for both emerging and developed companies coupled with currencies and commodities have potentially provided the catalyst needed for this asset class to re-rate. And given the valuation discount still implied, there is significant upside yet to be achieved if stability persists and fundamentals continue to improve.

Secular Opportunities
We believe secular tailwinds will be a more significant long-term driver of returns than the shorter-term cyclical factors that drive so much short-term performance. Secular themes can provide opportunities even in very challenging environments.

China, one of the largest markets of investable opportunities, is transforming to a consumer-driven economy. Here are a few key points regarding Chinese consumer activity: 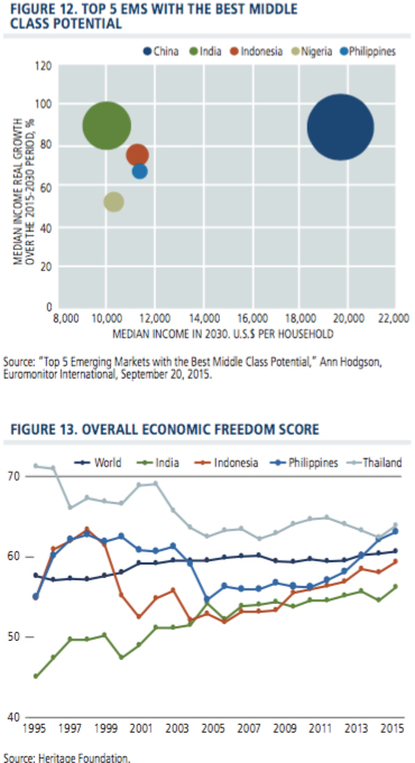 ASEAN (Association of Southeast Asian Nations) opportunities are relatively small today, and represent a small percentage of the MSCI EM Index. But, we believe that they will likely be significant sources of consumption over the next decade.

China by far receives the most attention given its potential over the next decade, but India, Indonesia and the Philippines also provide significant consumer opportunities (Figure 12).

We view expanding economic freedoms as one of the most powerful catalysts for economic growth and investment opportunity. While world economic freedom scores have remained relatively  at since 2008, economic freedoms within Thailand, the Philippines, Indonesia and India have moved up. And from 2015 to 2016, there has been a material uptick (Figure 13).


We believe that capital will ultimately  flow to where it’s treated best. As such, we believe the stage is set for more robust economic growth as well as increased investment opportunities across a range of industries in India, Thailand, Indonesia and the Philippines. Please see our recent articles focusing on these countries.

​In closing, we stress the importance of selectivity when evaluating opportunities within emerging market economies. The EM landscape is characterized by divergences among economic conditions, policy frameworks and opportunity sets.

​The team at TAMIM
CLICK HERE TO SPEAK TO TAMIM ABOUT INVESTING IN OUR INDIVIDUALLY MANAGED ACCOUNTS
Foreign Securities Risk: Risks associated with investing in foreign securities include  fluctuations in the exchange rates of foreign currencies that may affect the U.S. dollar value of a security, the possibility of substantial price volatility as a result of political and economic instability in the foreign country, less public information about issuers of securities, different securities regulation, different accounting, auditing and financial reporting standards and less liquidity than in U.S. markets.
Emerging Markets Risk: Emerging market countries may have relatively unstable governments and economies based on only a few industries, which may cause greater instability. The value of emerging market securities will likely be particularly sensitive to changes in the economies of such countries. These countries are also more likely to experience higher levels of inflation, deflation or currency devaluations, which could hurt their economies and securities markets.
Opinions and estimates offered constitute our judgment and are subject to change without notice, as are statements of financial market trends, which are based on current market conditions. We believe the information provided here is reliable, but do not warrant its accuracy or completeness. This material is not intended as an offer or solicitation for the purchase or sale of any financial instrument. The views and strategies described may not be suitable for all investors. The opinions and views of third parties do not represent the opinions or views of Calamos Investments LLC. Opinions referenced are as of August, 30 2016, and are subject to change due to changes in the market, economic conditions or changes
in the legal and/or regulatory environment and may not necessarily come to pass. This information is provided for informational purposes only and should not be considered tax, legal, or investment advice.
References to specific securities, asset classes and financial markets are for illustrative purposes only and are not intended to be, and should not be interpreted as, recommendations. This material is distributed for informational purposes only. The information contained herein is based on internal research derived from various sources and does not purport to be statements of all material facts relating to
the information mentioned, and while not guaranteed as to the accuracy or completeness, has been obtained from sources we believe to be reliable.
Indexes are unmanaged, not available for direct investment and do not include fees and expenses. MSCI Emerging Markets Index is a free  oat adjusted market capitalization index. It includes market indexes
of Brazil, Chile, China, Colombia, Czech Republic, Egypt, Hungary, India, Indonesia, Israel, Korea, Malaysia, Mexico, Morocco, Peru, Philippines, Poland, Russia, South Africa, Taiwan, Thailand, and Turkey. MSCI Emerging Markets Value Index captures large and mid cap securities exhibiting overall value style characteristics across 23 Emerging Markets (EM) countries. MSCI Emerging Markets Growth Index captures large and mid cap securities exhibiting overall growth style characteristics across 23 Emerging Markets (EM) countries. U.S. Dollar Index measures the value of the U.S. dollar relative to a basket of foreign currencies, including euro Area, Canada, Japan, United Kingdom, Switzerland, Australia, and Sweden. The JP Morgan Emerging Markets (EM) Currency Index tracks the performance of emerging-market currencies relative to the U.S. dollar. Bloomberg Commodity Index is a broadly diversified commodity price index distributed by Bloomberg Indexes. Thomson Reuters CRB Industrial Metals Producers Index acts as a representative indicator of industrial metals producers in today’s global commodity markets. S&P GSCI Spot Index® is widely recognized as a leading measure of general price movements and inflation in the world economy. BofA Merrill Lynch High Yield US Emerging Markets Corporate Plus Index is com- prised of U.S. dollar-denominated bonds issued by non-sovereign emerging markets issuers that are rated below investment grade and issued in the major domestic or eurobond markets. BofA Merrill Lynch U.S. Emerging Markets External Debt Sovereign & Corporate Plus Index is representative of emerging markets corporate and sovereign debt.
ROE is return on equity, a measure a company’s profitability, measuring how much pro t is generated with the money shareholders invested. Price-to-book ratio is the current closing price of a stock divided by the latest quarter’s book value per share. Purchasing Managers Index (PMI) measures the strength of the manufacturing sector. Forward P/Es are based on forecasted earnings. Earnings per share (EPS) is a company’s profit divided by its number of common outstanding shares. CAGR, or compounded annual growth rate measures year-over-year growth. Price/sales ratio is a stock’s capitalization divided by its sales over the trailing 12 months. Yield to worst is the lowest potential yield of a bond, absent default.
https://www.tamim.com.au