This week Guy Carson, manager of the TAMIM Australian Equity All Cap Value IMA, takes a look at the recent RBA decision to yet again leave rates as they are. Have they made the right call? Should they have made a change?
The RBA's Conundrum
- 6 April 2017 -
Earlier this week the RBA remained on hold for the 7th consecutive month. However, when we look at economists’ forecasts for the remainder of the year there is significant divergence. Some believe that the economy needs further stimulus whilst others believe we are through the worst and will eventually follow the US Federal Reserve in raising rates. The interesting thing is that both cases have some merit when looking at the overall data and it’s only when we delve down to a state level that we can really understand why. 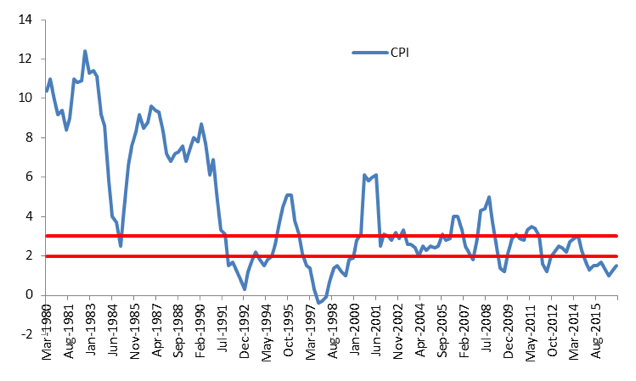 Source: ABS
So currently the RBA is not achieving its price stability target. What about full employment? After seeing the unemployment rate improve from 2015 through to mid last year, we are now starting to see job growth slow. In fact the unemployment rate since the last RBA cut in August last year has gone from 5.7% to 5.9%, which isn’t exactly what they would have wanted. In addition the underlying quality of the jobs created in recent times has been poor with a large shift towards part-time employment meaning that underemployment has risen as well: 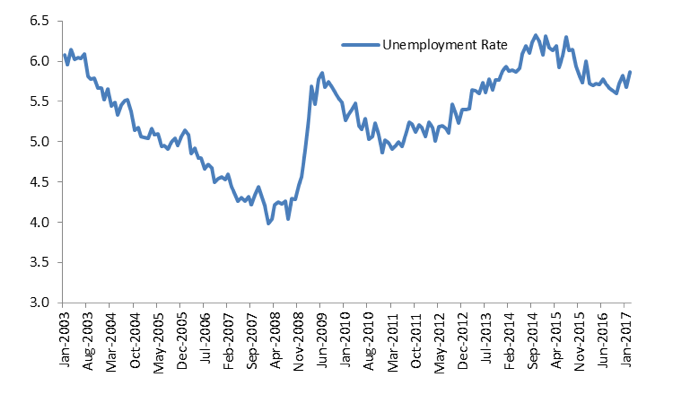 Source: ABS
Adding to this weak employment picture, wage growth is at record lows and this indicates that plenty of “slack” remains in the labour force. The Wage Price Index (WPI) is currently running at 1.9% year on year and has fallen steadily since 2012: 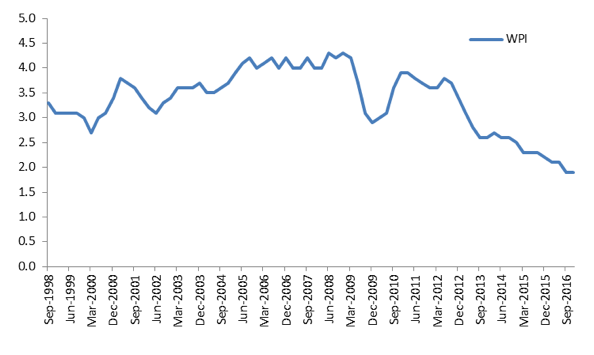 Source: ABS
It’s not until you look under the headline unemployment rate that you will notice some significant divergence in trends between states:
If we look at the period of improvement in the unemployment rate from 2015 through to mid last year, it was largely driven by New South Wales and Victoria (as well as South Australia improving from a very high level). New South Wales currently has the lowest unemployment rate in the country at 5.2% which is near recent lows. Victoria has seen its unemployment rate tick up slightly to 6.1% but this is slightly misleading given the state has been the primary driver of job growth in the last year. The below chart looks at net jobs growth in each state over the last year and Victoria has represented a staggering 98% of the Australian total. The unemployment rate in the state has been impacted by high migration and it should be no surprise that people are moving to Melbourne given it’s the only place with jobs growth. Immigration tends to be pro-cyclical, i.e. people will move to where the jobs are. 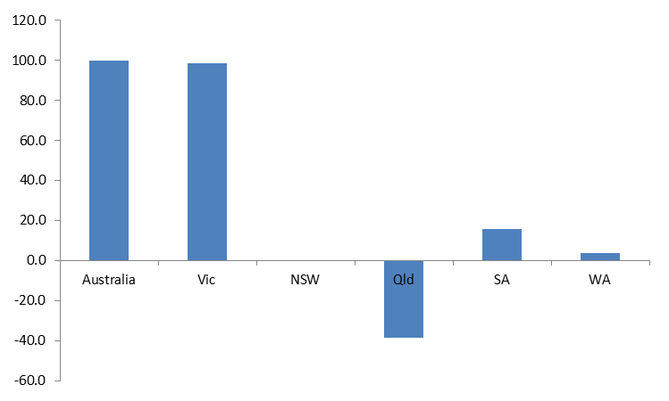 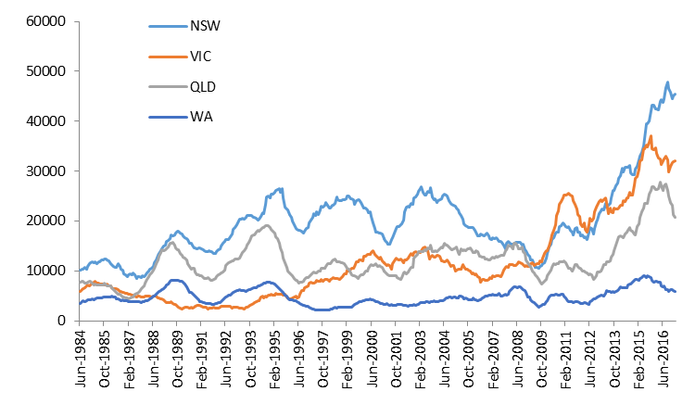 Source: ABS
Western Australia saw building approvals peak in June 2015 and hence is dealing with the end of a residential construction boom now as well as the ongoing falls in mining investment. The major concern now is Queensland where the annual number has rolled over, and on the volatile monthly basis it looks disastrous, as can be seen in the chart here: 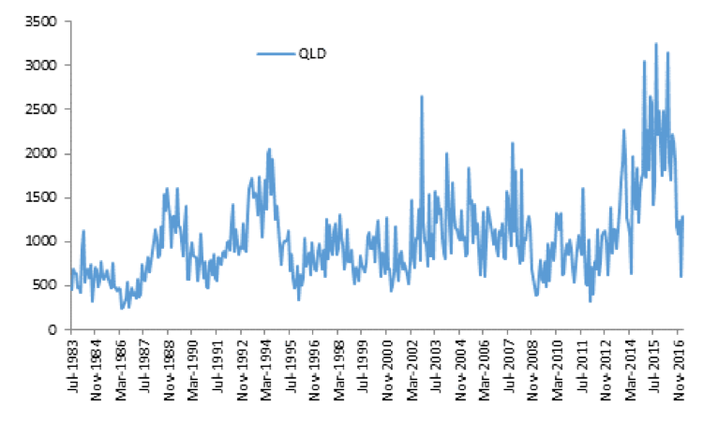 Source: ABS
This is a significant headwind that the Queensland economy faces over the next 12-18 months. It is likely going to put further pressure on the current employment situation. So you could argue that Queensland is in need of further stimulus.

Moving across to Western Australia and whilst the employment situation has improved slightly in recent months, unemployment still remains elevated and households are struggling. We have talked previously about how mortgage arrears for the banks in WA on a 90 day basis have moved up significantly over the last 12 months (again, see our 2017 Outlook). We can now see, via Moody’s, that 30 day arrears are shooting higher for the entire country. This is being driven by the 2013 vintage of loans which is not overly surprising given it corresponds with the mining investment peak of 2012. This vintage is the purple line in the chart below.

Further evidence of household stress can be seen in the Retail Sales data where WA has seen very little growth since the beginning of 2016. Quite clearly WA households could use a further interest rate cut. 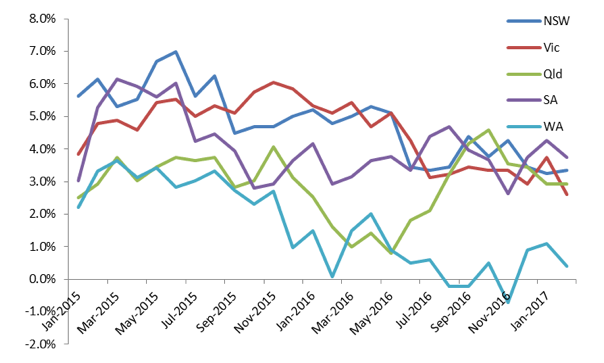 Source: ABS
Overall, there are arguments for both directions in rates. WA and Queensland are both in need of stimulus; an interest cut rate can easily be justified in both states. Meanwhile, the unemployment rate in New South Wales is sitting near decade lows at 5.1% and Victoria is recording strong jobs growth. Both of these states are in the midst of a record residential construction boom and have large infrastructure projects in progress or due to start. One could argue that interest rate rises would be more appropriate for these states.

Thankfully there is a solution but unfortunately it relies on a functional political system. Too often in recent years, central banks have been the only port of call for stimulus globally. Monetary stimulus (interest rate cuts and quantitative easing) has been the dominant force whilst fiscal stimulus (government spending) has been non-existent. On a global basis, there is hope that this might change, a big part of the Trump rally is based upon expectations of increased infrastructure spend in the US (whether Trump lives up to these expectations is another story altogether). Unfortunately in Australia, we have a government fixated on reducing its deficit and focused on the corporate tax rates. These tax cuts are more likely to just flow through to corporate profits and are unlikely to lead to the job gains and wage increases that the government is trumpeting.

Looking at the above state of play, we believe targeted fiscal stimulus in the form of infrastructure spending into Western Australia and Queensland would be the best option for the Australian economy. This would take pressure off the RBA, improve job prospects in those areas and potentially slow interstate migration to Victoria and New South Wales. The current government should be considering some sort of action, after all the WA voters recently showed their thinking on the matter by overwhelmingly going against the incumbent Liberal government. This (in addition with the rise of One Nation in Queensland) is a function of an unpleasant economic reality. It is similar to the trends seen globally which have seen the UK leave the EU, Donald Trump’s rise to power in the US and the popularity of Marine Le Pen in France. If things don’t improve, people will vote for change.