Robert Swift, of the TAMIM Global Equity High Conviction IMA, takes a look at the sideshow that is North Korea. We do not believe that North Korea impacts global economic fundamentals and that any short term dips that it may create in markets are good opportunities for us to purchase assets we would like to hold over the long term.
North Korea - "Buy on the cannons; sell on the trumpets"​
- 20 April 2017 -
Robert Swift
The saying was attributed to Nathan Rothschild from 1810 when Europe was plagued by periodic outbreaks of war which obviously needed financing, and which might end in change of government or, catastrophically, an invasion by foreign power and confiscation of assets. The anticipation of this turmoil led to falls in bond and equity prices which offered an opportunity to invest at cheaper prices. Fortunes are typically made by buying on dips when others panic. 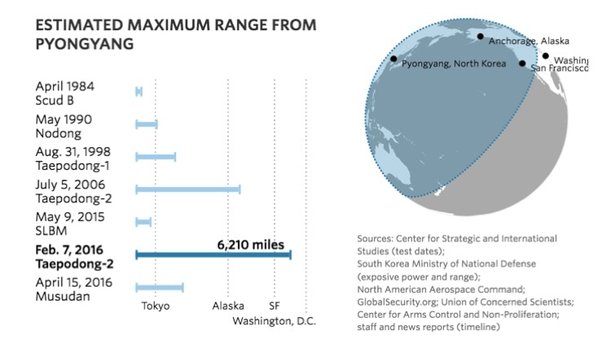 Source: Wall Street Journal
With all eyes on North Korea and growing tension in the region is this such a time? Is the current selling, particularly in Asia, offering a chance to repeat Rothschild’s success?

It is hard to argue that equities are in ‘bargain basement’ territory – or at least that USA equities are. Over the last several years they have risen substantially and depending on the definition of the earnings number you use trade between 18 and 22 x next year’s earnings. 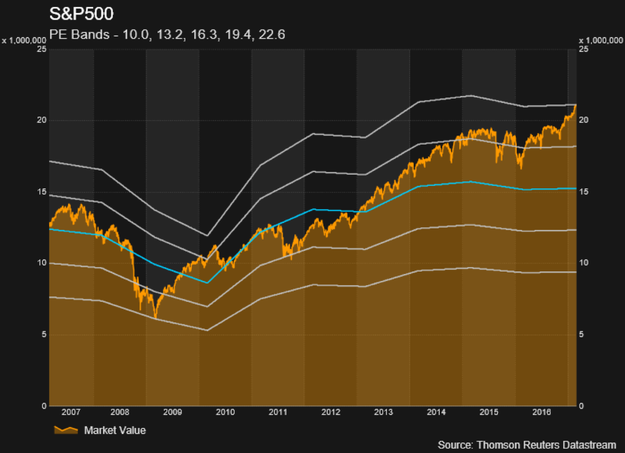 Source: Thomson Reuters Datastream
On the other hand earnings volatility has been reduced and is likely to remain low, and it is unlikely that 10 year Treasury Note yields, from which we can estimate the fair price of equities, will go much above 3%. (They are currently just over 2%) Both of these help underpin USA equities at current levels and make selling frenzies attractive entry points.

So while not bargain basement they aren’t a bubble either. Looking at the average PE is misleading anyway in such a diverse universe of stocks. It’s a bit like saying “if I put my head in the oven and my feet in the fridge, then on average I’m comfortable”. It’s nonsense. Focus on stocks and try to pick those whose prospects are strong but whose share prices have fallen to where PE multiples are reasonable.

How can we be so sanguine?

In what should you invest?

Now is not the time to reduce equity risk. If you are heavily invested in Australian equities then try to become more diversified. Be wary of the financial sector here which although not badly managed represents a single exposure to residential real estate. More legislation is likely which will reduce the potential for growth of that loan book and then where is the growth going to come from? Not overseas where NAB and ANZ have conspicuously failed and are now withdrawing, nor from investment banking. It won’t take much of a PE derating to make the franked dividends look a forlorn reason to own so much of the Australian financial sector.

​The team at TAMIM
Speak to TAMIM about investing in our Australian and International managed accounts
https://www.tamim.com.au