This week Guy Carson, manager of the TAMIM Australian Equity All Cap Value IMA, takes a look at the Australian banking sector, how it generates profit, how this has operated historically and what the outlook is going forward. Guy argues that the tailwinds aiding bank profitability over the last 25 years may be coming to an end.
Australian Banks: The death of a 25 year bull market
- 20 April 2017 -
​Guy Carson
In the early days of May, ANZ, Westpac and NAB will all report their first half results. Short-termism will grip the market and the focus will be on whether earnings from the October to March period are above or below expectations. This will undoubtedly swing share prices a few percent in the appropriate direction and as a result lead to under or out performance for fund managers relative to the Australian index. Now if I was a betting man, I would probably say the odds are in favour of a “beat”. This is based on the evidence from CBA’s recent result that showed an easing of credit conditions in the corporate sector combined with the APRA data showing the banks continue to grow their investor mortgage book (at least until last month). However, when investing it is the not the last six months that will determine your success or failure. It is important to take a longer term view of the companies and the economic drivers that will drive the performance over coming years.

In order to understand this, we have a look at two areas:

Bottom up analysis – How the banks have performed

The banks are mainstays in most Australian equity investor’s portfolios and with good reason. They have been remarkable investments. Commonwealth Bank listed in 1991 at $5.40 per share. The price currently sits at around $85 and the company has paid plenty of dividends along the way. Dividends for the Big Four banks are a major attraction and have grown fairly consistently over recent history with one minor hiccup in 2009. 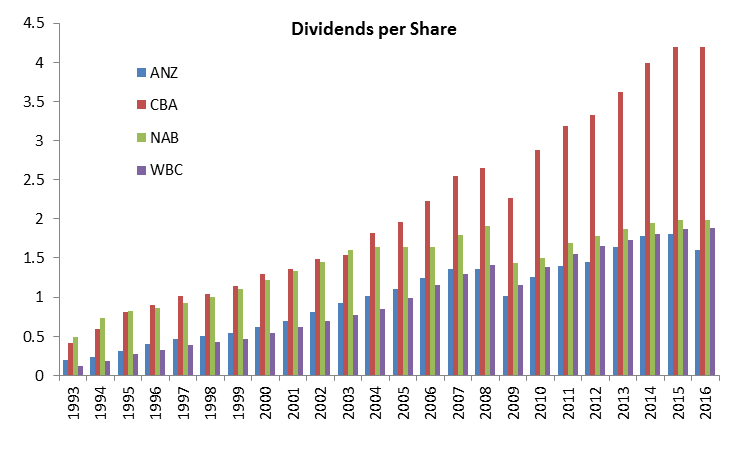 Source: Company filings, Thomson Reuters
By any measure an investment in CBA has been incredibly successful. To understand why it has been it’s worth stepping back and looking at how a bank makes money. This can be broadly defined as follows:
Any objective analysis of the above for the Big Four banks over recent history suggests they have done a good job. Starting with point number 3 above, all of the Big Four have used their balance sheet to good effect and grown their loan book significantly. The below chart looks at total loans (chart is in billions). 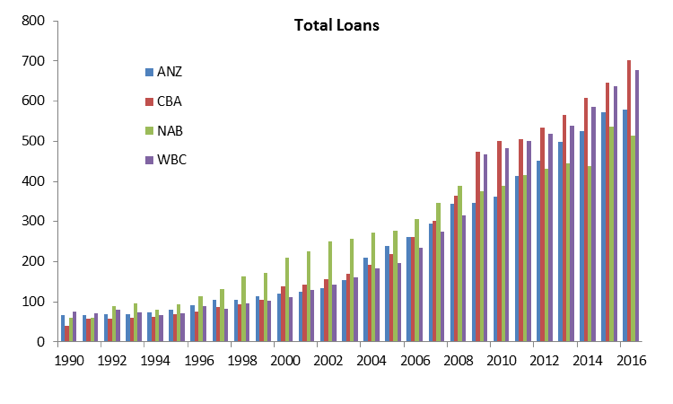 Source: Company filings, Thomson Reuters
The four banks as a whole have grown their loan books from $242bn in 1990 to almost $2.5tn today. That is a 10 fold increase with CBA leading the way going from last to first.

So they have had no problems growing their book. Moving onto point 4 and the Net Interest Margin (NIM) which has gone the other way. 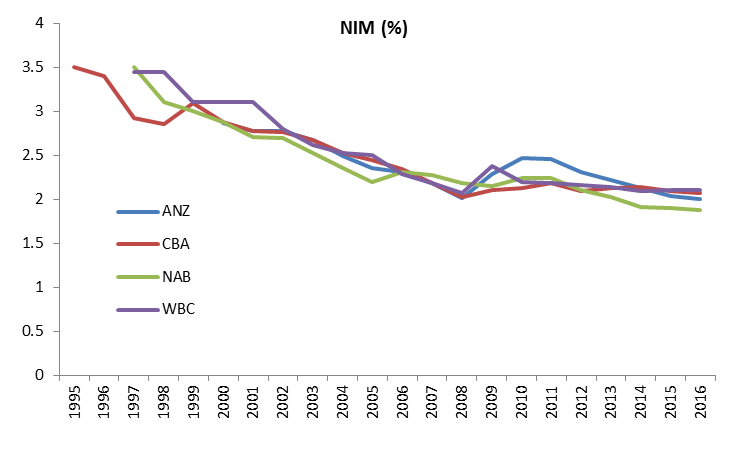 Source: Company filings, Thomson Reuters
Net Interest Margins have fallen from around 3.5% in the mid-1990s to 2% today. Now there are a lot of explanations for why this has happened but one of the key ones in our opinion is technology. Technology has brought down the cost to income ratio for banks by allowing them to work more efficiently with less staff concentration. The below chart shows this with cost to income ratios dropping from above 60% in the early 1990s to around 40% today.

Source: The Australian, CLSA
The lower cost to income ratios have allowed the banks to reduce their NIM and maintain profitability. Return on Equity (ROE) for the last 20 years has been consistently in the mid to high teens. You would be hard pressed to find this consistency in any other banking system around the world. 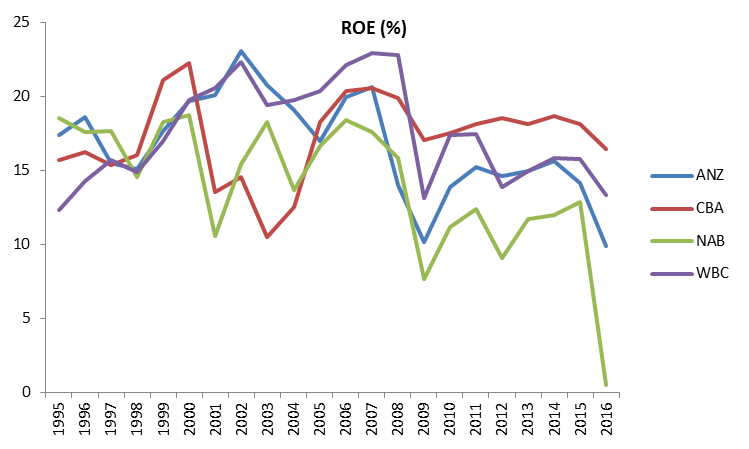 Source: Thomson Reuters
All in all, this track record is impressive and as a result the shares have been great investments. Although one aspect of the above chart does give some slight concern for the future and this is the dip in the ROEs over the last year driven by regulatory changes. We’ll cover this in the next section. 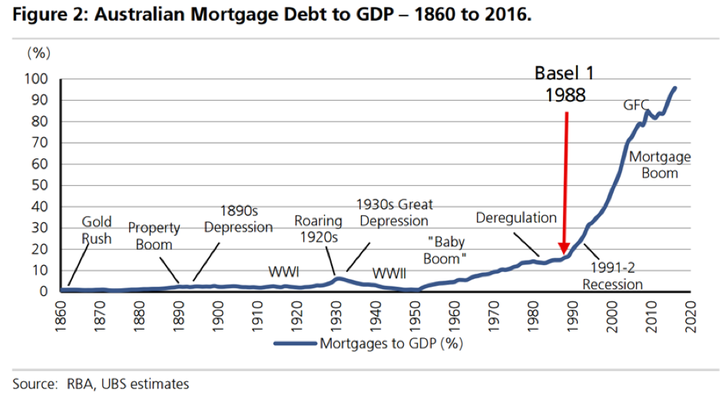 The original Basel accord in 1988 looked at minimum capital levels and the risk weightings of different types of loans. For residential mortgages, risk weights were set at 50%, hence banks had to carry half as much equity against them and could in effect leverage their balance sheet twice as much. This helped kickstart a boom in Australia.

Adding to this was a falling interest rate environment. Interest rates over the last 27 years have gone from 17.5% to 1.5%. Amazingly over that period, Australia has barely been through a tightening cycle. 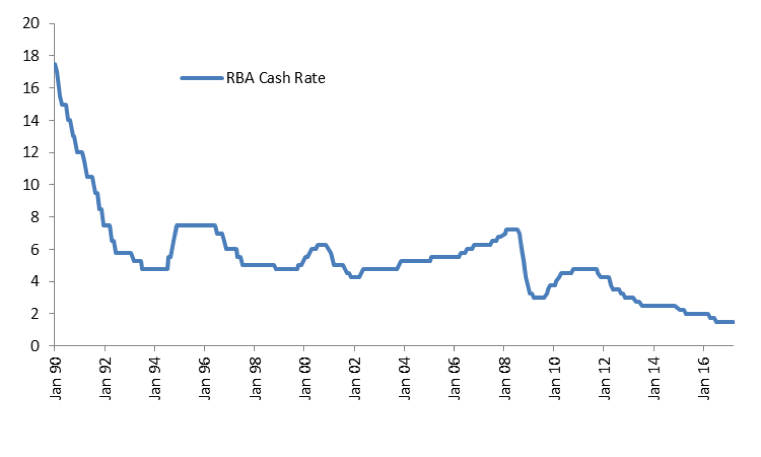 Source: RBA
Basel 2 in 2007 has added a further tailwind with the banks effectively allowed to set their risk weights through their internal risk models. The banks moved to a 17% risk weighting for residential mortgages. Given an 8% minimum tier one capital ratio from APRA, this allowed banks to leverage their equity 83x. A 17% risk weight means they only have to hold 17% of the 8% minimum capital requirement. In other words for $1 of equity, a bank could lend out a staggering $83 in residential mortgages.

The impact of lower interest rates and favourable risk weightings has meant that our banks have in effect become rather large building societies. Australian banks have a disproportionate amount in residential mortgages when compared with international peers. 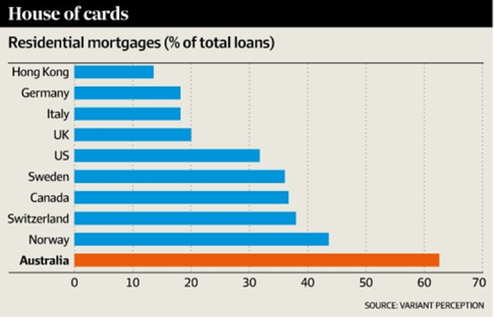 In becoming building societies the banks have driven household debt up. Australia now sits in 2nd place globally with regards to household debt to GDP. 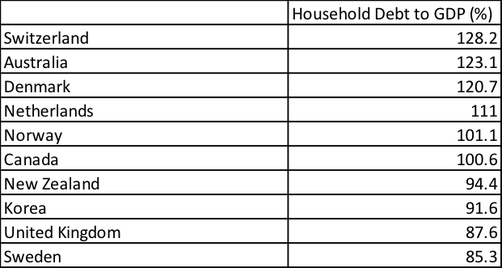 Source: Bank of International Settlements
Comparing our journey to some other significant countries, you can see one major difference. In the period post 2007, all of these other nations have been through “deleveraging cycles” and household debt at some point has fallen (with the exception of Canada, an economy similar to Australia with a large exposure to the resource sector and commodity markets). Australian households never deleveraged and have in fact taken on more debt. Household debt has risen from 40% of GDP back in 1990 to 123% today. 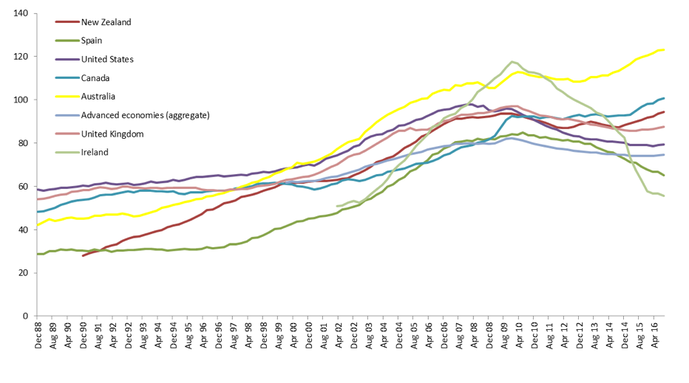 Source: Bank of International Settlements
The problem for banks now is that the two key drivers that lead to this growth in the mortgage book and household debt are either exhausted or reversing.

Investing is all about probabilities. The value of a share is the sum of its future cashflows. The future however is unknown. Therefore, when establishing what a company is worth or how much certain shares will return we need to look at a range of circumstances to understand the potential upside and downside scenarios.

For the banks, we know that loan growth going forward will be constrained. The best scenario is a likely flat lining of the household debt to GDP ratio over the coming years. In that instance, earnings will grow at roughly the level of nominal GDP which has averaged 3.3% over the last 5 years. Add to that a dividend yield of around 5% and some franking and you get a return of around 10%, a perfectly reasonable outcome for a low interest rate environment. The problem is this is the best expected outcome (outside of a surge in GDP growth that seems unlikely), and it doesn’t even include the likelihood of higher capital requirements from APRA.

What about the other side of the equation? Well, high household debt doesn’t cause a problem on its own but it does make our economy and our banks vulnerable to a shock. The last time we had a shock two of the Big Four recorded significant losses. In fact, Westpac managed to destroy 23% of their equity in one year. A loss that large will lead to a significant rerating in the Price to Book multiple meaning the loss for shareholders would be considerably more than the 23%.

Source: Company filings, Thomson Reuters
So what could lead to a potential shock? There are three potential catalysts:
Ultimately, when we assess the outlook for banks we arrive at a conclusion that asymmetric risks exist with limited upside but significant downside. When we look for companies to invest in we want the opposite, limited downside with large potential upside. As a result we continue to avoid the banks, believing that the 25 year bull market has come to an end. The only question that remains for us is whether this bull market ends with a bang or a whimper.