This week Guy Carson, manager of the TAMIM Australian Equity All Cap Value IMA, takes a look at the Australian supermarkets, the prevailing duopoly, incoming competition from ALDI, Costco and Amazon and how the future looks for this sector.
Australian Supermarkets: The death of a duopoly
- 4 May 2017 -
​Guy Carson
If you were to travel back in time five or ten years ago and asked Australian fund managers to name some of the highest quality companies listed on the ASX, there would be very good chance that a number of them would name Woolworths. For a long period of time the company was so consistent with its store roll-out, earnings growth and returns on capital that it was hard to go wrong buying the shares. Unfortunately that has all changed. Fast forward to today and ask some of the same fund managers to name one of their favourite turnaround plays and you might get the same answer, Woolworths.

What caused this dramatic change in investors thinking? For the answer we need to look through recent history. Back in 2007, the industry structure was a cosy duopoly of Coles and Woolworths with a third player, Metcash, carving out a niche. Life was easy for Woolworths, particularly as their management stayed one step ahead of Coles in store layout design. The Coles share price was suffering and Woolworths was booming. However, the first major change to the industry was close and after rejecting two bids from private equity firm Kohlberg Kravis Roberts & Co, Coles was bought by Wesfarmers for $22bn. This was the largest ever takeover in Australian corporate history and many fund managers wrote the price off as too high and believed Wesfarmers would fail.

The initial share price reaction was negative for Wesfarmers (WES) whilst Woolworths (WOW), seen as “recession proof” by many, held up remarkably well during the GFC. Wesfarmers raised capital initially at $29 for the acquisition then was forced into another raising at $13.50. Investors in those capital raisings have done well with the share price sitting at $43 now. 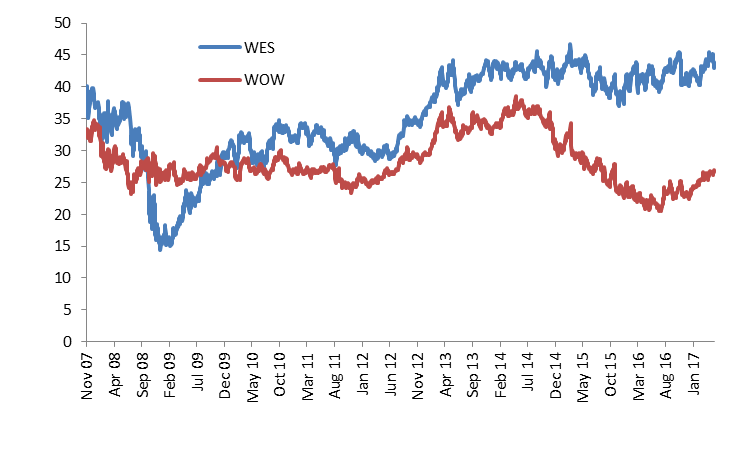 Source: Thomson Reuters
Meanwhile in 2014, Woolworths share price started to take a turn for the worse. They had begun to lose to market share. After years of mismanagement, Coles had become a legitimate competitor (arguably by copying the Woolworth’s model). In addition a new threat had emerged. After opening its first store in Australia in 2001, Aldi has opened a further 456 stores and has grown to be a significant presence with close to $7bn worth of sales last year. In comparison, Woolworth’s food division had close to $35bn of sales, and Coles had $32.5bn. 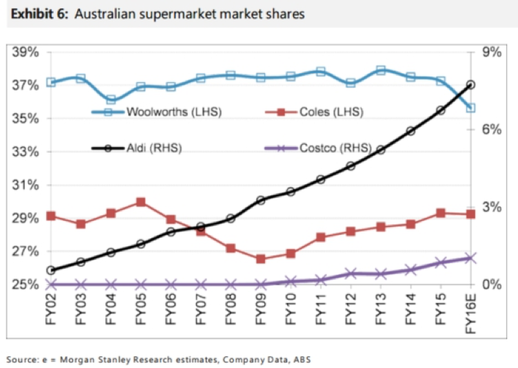 The main loser to date from Aldi’s rise has been Woolworths with Coles more or less maintaining their market share after gaining ground between 2009 and 2015. The reason behind Cole’s success during this period was twofold.  Firstly under new ownership, the company spent a lot of money on store revamps to make their offering more appealable. In recent years the company has spent a significant amount of growth capex in order to catch Woolworths. The below chart compares their capex spend to their depreciation charge (a proxy for sustaining capex) to show how aggressive their spend has been. 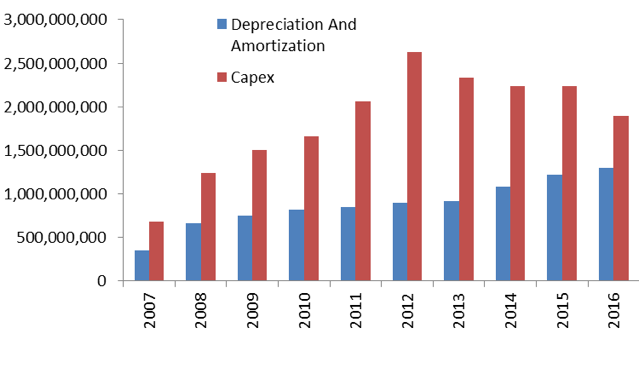 Source: Thomson Reuters
With more appealable stores they closed the quality gap between themselves and Woolworths. The second aspect of their success was undercutting Woolworths with regards to price. Coles typically ran EBIT margins of below 5% versus Woolworths above 6%. Hence, consumers started to migrate to the cheaper option. Woolworth’s margins (which were the highest of any supermarket in the world) were simply unsustainable. The company has now realised this and has started to compete with Coles on price as can be seen by the fall in margins below. 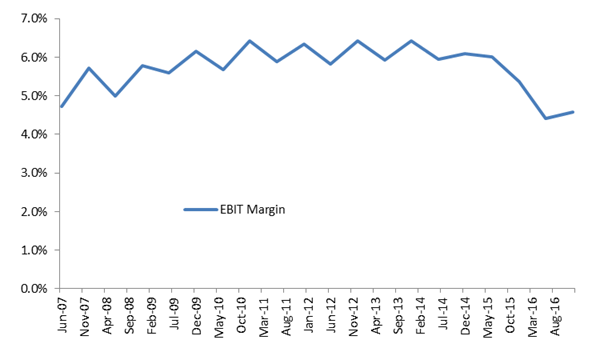 Source: Thomson Reuters
Then there is the imminent arrival of Amazon into Australia. This is less of a worry than the above threats. Amazon has struggled to make meaningful headwinds into the US market with consumers still preferring physical stores for groceries. Their market share currently stands at around 1% of the US market and in attempt to grow that, the company is experimenting with physical stores in Seattle.

Whilst Amazon is currently grabbing headlines, the major threat for the major supermarkets remains Aldi. The constant of an aggressive low cost competitor means life will remain difficult. Despite that pressure we have seen a significant rally in the Woolworths share price since June last year. The rerating has been driven by two consecutive quarters of solid sales growth and a rerating in the Price to Earnings ratio from around 16x to 23x. Meanwhile, Wesfarmers has gone the other way and seen their P/E ratio fall from over 20x to 16x (driven by a flat share price and rising earnings from their coal division). 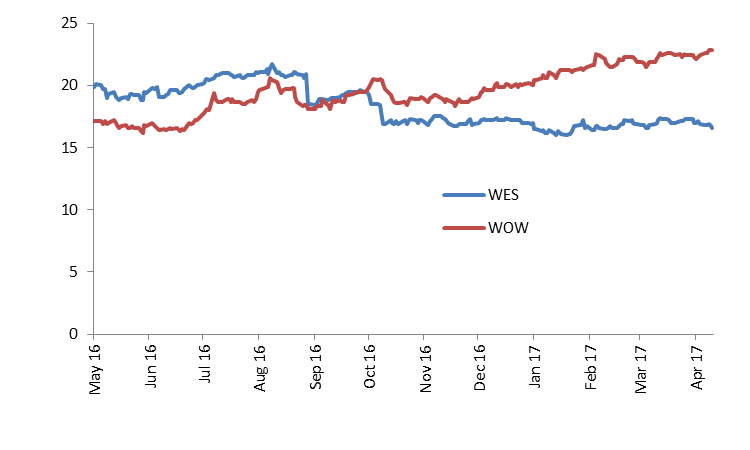 Source: Thomson Reuters
The rerating in Woolworth’s Price to Book valuation multiple has been to a similar scale, going from around 3x to 4.1x. A level similar to what the company traded on between 2009 and 2014. 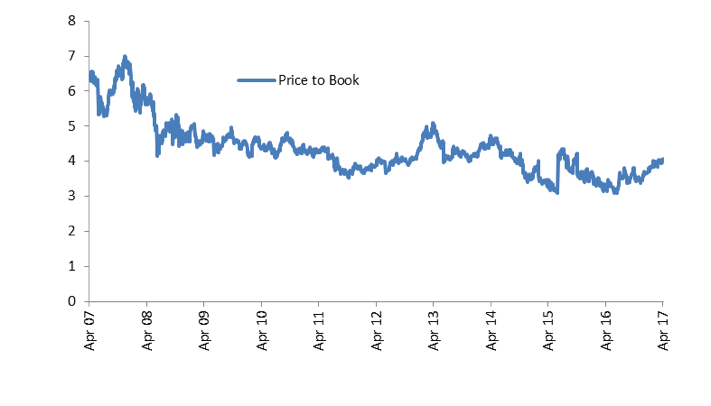 Source: Thomson Reuters
This is despite Return on Equity (which is the return on the book value that should justify the above multiple) having fallen significantly in recent years. 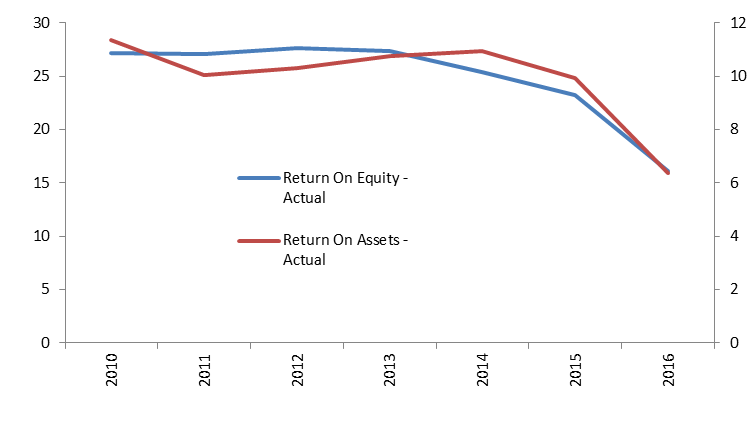 Source: Thomson Reuters
From the above valuation metrics, it appears the popular trade right now is to bet on a Woolworths turnaround. If we were running an index aware strategy, we would much prefer to take the 16x on Wesfarmers instead of paying 23x for Woolworths. In addition to a cheaper valuation, Wesfarmers has the added advantage of owning Bunnings. Bunnings is a very high quality business that represents 34% of Wesfarmers EBIT, is currently growing at a double digit rate and has a return on capital employed of above 35%.

One of the great aspects of our strategy is that we aren’t benchmark aware. A company that comes into our portfolio has to stand on its own two feet and not just be a better alternative that its competitor. Whilst we would be more likely to invest in Wesfarmers than Woolworths at this point of time, we don’t due to concerns that the market is underestimating the ongoing growth of Aldi on both businesses.