Following on from Guy Carson's article - ​Australian Banks: The death of a 25 year bull market - last week, this week we highlight an article from Sam Ferraro on APRA and the impact their macro-prudential changes will have on the banks. While the article is slightly more technical, it may be one of the more important reads on the banks this year.
- Evidente -
APRA'S QUEST FOR AN UNQUESTIONABLY STRONG FINANCIAL SYSTEM CONTINUES
Penned April 6, 2017

It has been a good week for APRA and the RBA.  Their announcements surrounding the expansion of the use of macro-prudential policy tools and warnings around slow growth in rents and the outlook for property prices have had the initial desired effect of maximum media coverage.  They would hope that lenders and potential property investors are getting the message.

The head of APRA yesterday, further weighed in on the debate surrounding banks' loss absorbing capital buffers.  Mr Wayne Byres had already bought into the key recommendation from the Financial System Inquiry (FSI) that Australia's financial system should be unquestionably strong due to the fact that Australia has historically been a net importer of financial capital, and the high concentration of residential mortgages on banks' loan books.  To that end, the FSI suggested that Australia's banks' capital positions should be in the top quartile globally.  APRA hasn't committed to this hard edged quantitative aspiration or target and it is at their discretion which capital ratios they focus on.

In mid-2016, APRA lifted the risk weights used by banks with internal risk based models (ie. larger banks) by 50%, from 17% to 25%.   In yesterday's speech however, Mr Byres took a more glass half empty approach by drawing attention to the fact that Australia's banks had indeed lifted their risk weighted capital ratios since the financial crisis, but their leverage ratios had remained little changed during this time.  The leverage ratio, the ratio of total assets funded by shareholders' equity, has increased marginally to around 6.5% from 6% in 2007 (see chart). 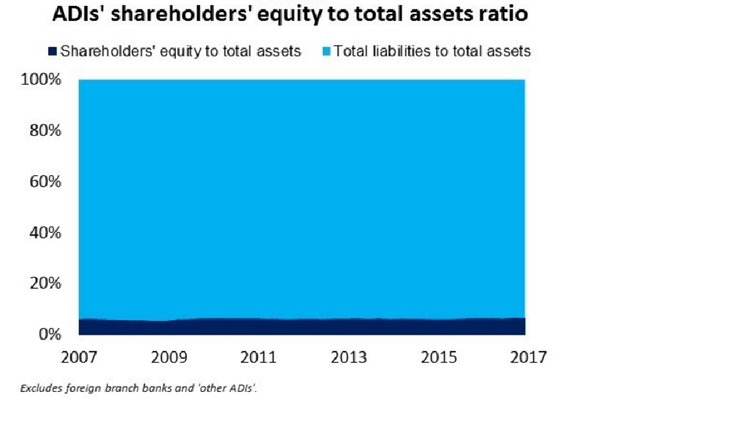 The Tier 1 capital ratio - which represents the ratio of shareholders' equity to total risk weighted assets - has increased to 12% from 8% over the past decade (see chart).  Risk weighted assets assign lower risk weights to loans that are considered less risky (eg. residential mortgages) and higher risk weights to more risky loans such as commercial lending.  The key implication is that a bank must therefore must use more shareholders' equity to fund a commercial loan than a residential mortgage. 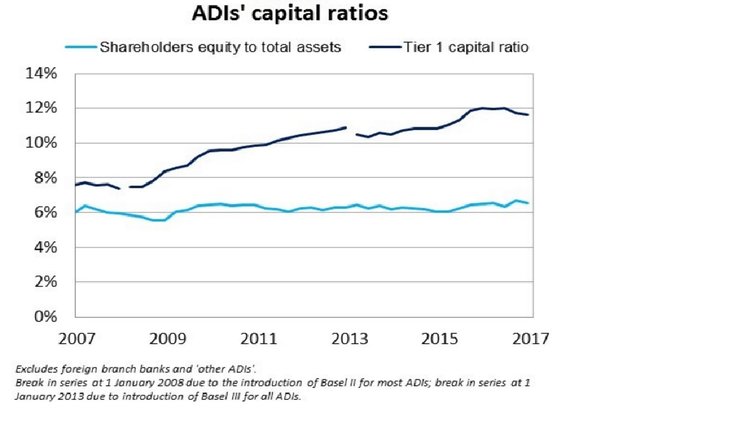 Because housing loans attract low risk weights, growth in risk weighted assets has been slower than growth in total assets as banks have lifted the share of residential mortgages in their loan books (see chart).  A cynical interpretation is that the banks have gamed the risk weights; a more generous interpretation is that a lift in mortgage lending has helped to offset the persistently weak demand for corporate lending since the crisis. 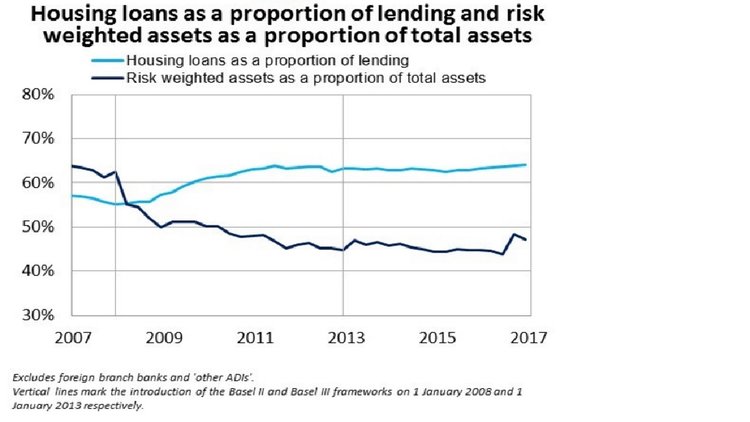 Against this backdrop, Mr Byers announced that it would release an issues paper later this year, outlining a road-map on how it intends to further strengthen banks' loss absorbing capital ratios, and hinted at the prospect of a further lift in the risk weight for residential mortgages used by the larger banks.

The key development in Evidente's view is the focus on the leverage ratio.  APRA has left itself plenty of flexibility at this stage, and I am not suggesting that that APRA intends to target a desired leverage ratio.  But as a guide only, we undertake a global comparison of leverage ratios and a sensitivity analysis.  At present, the leverage ratios for the Australian majors range from 6% to 6.5%, which puts them below the median of the largest 100 developed market banks by over 100 basis points (see chart). 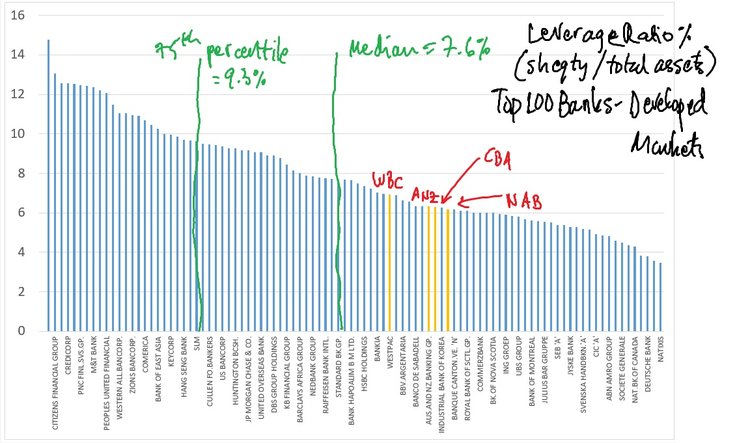 Assuming that the sector's assets remain unchanged from current levels, the majors would need to top up their shareholders equity base by 18% or $40 billion to reach the global median of 7.6%.  To get to the top quartile would require an additional $70 billion or a 30% more equity. These are large numbers and I suspect for this reason, APRA won't be imposing a hard edged target on the leverage ratio. 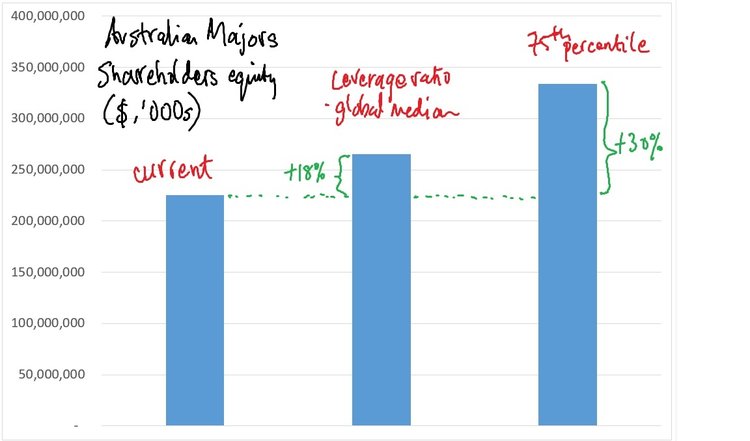 Finally, it is not just possible but likely that the path to stronger capital positions will involve some contraction of assets.  This has already been evolving, with annual asset growth in the sector turning negative for the first time in over two decades recently (see chart).  ANZ and NAB have been seeking to 'shrink to greatness' by shedding low return international businesses, and Evidente expects this process to continue with ANZ and CBA looking to sell their wealth management businesses. 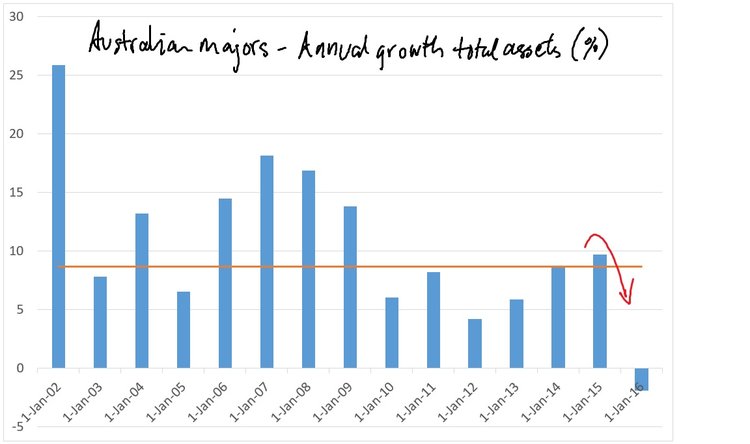 Sam writes as a freelance journalist for The Age, Sydney Morning Herald and Australian Financial Review, was a member of the advisory board of API Capital, teaches business finance and international finance courses to undergraduates at RMIT, and most importantly Sam is a well respected source of information and friend of TAMIM.
to discuss how tamim can help with your investment portfolio please click here.
https://www.tamim.com.au