Having recently introduced the exciting new Australian Equity All Cap Value strategy on the TAMIM investment platform, managed by Guy Carson, we thought it would be a good idea to put him straight to work and present his outlook for the year ahead.
Australian Outlook 2017: Beware the two speed economy
Guy Carson
​- 2 February 2017 -
The Australian Bureau of Statistics will release the December Quarter GDP numbers on March 1 and the focus will be on whether Australia has just experienced its first recession for 25 years. Given the September Quarter saw a negative reading, we only need one more negative quarter to push us there. So, is this likely? Well, based on currently available information our best estimate would be for a slight positive number (although we do have to acknowledge GDP numbers are notoriously unpredictable and we could be completely wrong). Our expectation is that net exports will help prop up GDP on the back of rising commodity prices and hence Australia will once again avoid the dreaded recession.

So does this mean that Australia remains the miracle economy and that we are out of the woods once again? Has the RBA been able to negotiate another slowdown successfully? We are not so sure, and when we delve below the surface of the headline numbers, we see some significant cracks appearing in the Australian Economy.

The below chart looks at State Final Demand across the five largest states, this is a measure of domestic demand in each state. As you can see from below, Western Australia (WA) has a history of booms and busts; however this current bust is the greatest by some distance. For the 12 months to the end of September, State Final Demand in WA fell by a staggering 9.4% and there are very few signs of improvement any time soon. This is more like a depression than a recession. 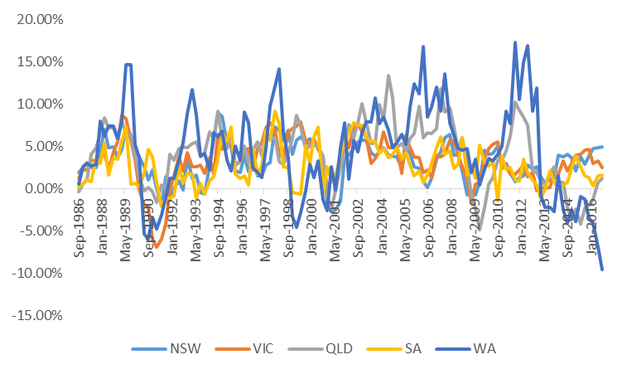 Source: ABS
In addition, the unemployment rate in WA has risen from a low of 3.5% in 2012 to 6.6% currently, confirming its place as the weakest economy. The rise in the unemployment rate would have been substantially higher if not for a fall in the participation rate at the same time. Overall, the job market in WA has seen a significant deterioration since the end of the mining boom. 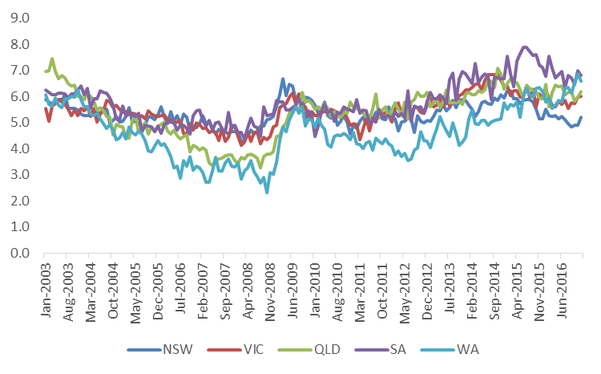 Source: ABS
What is driving the divergence between states? The end of the mining boom is an obvious reason why WA is finding life difficult however it doesn’t explain the whole story. To understand the other drivers at play we need to reference a 2007 paper written by US Economist Edward E. Leemer called “Housing IS the Business Cycle”.  In this paper, Leemer looks at all the recessions in the United States since World War 2 and finds that 8 out of the 10 were “preceded by substantial problems in housing and consumer durables.”  This leads him to conclude that “Housing is the most important sector in our economic recessions, and any attempt to control the business cycle needs to focus especially on residential investment.”

The only two US recessions that are exceptions to the above were the end of the Korean War in 1953, caused by a decline in defence spending, and the 2001 “Tech Wreck”. As the paper was written in 2007, we can now improve the success ratio to 9 out of the last 11 recessions following the 2008 recession, something that Leemer warned about.

The key reason Leemer gives for housing being so important to the economy is that “house prices are very inflexible downward, and when demand softens as it has in 2005 and 2006, we get very little price adjustment but a huge volume drop. For GDP and for employment, it’s the volume that matters."

In other words, a housing cycle will typically see a drop in transaction volumes and building activity that will lead to job losses and ultimately a downturn in the economy. The multiplier effect with the housing market is large with occupations ranging from developers, builders, agents right through to financiers impacted.

So what does this have to do with Australia? Well, since 2011 the RBA has cut cash rates from 4.75% to 1.5%. They started cutting in 2011 because they saw some headwinds for the economy - most notably the end of the mining construction boom. Mining construction peaked in 2012 and has detracted from growth every year since.

This lowering of the interest rate has led to an unprecedented construction boom in housing, particularly along the East Coast and most notably in apartments. In fact, the current level of dwelling construction per capita in Australia is greater than that of the US at its peak in 2007.

The charts below look at building approvals for apartments across New South Wales, Victoria, Queensland and WA (data is rolling annual). This is a leading indicator of construction activity and we can see all four states have recently reached all-time highs.
The first state to see building approvals peak was WA. WA approvals peaked in June 2015 and now residential construction is starting to detract from the WA economy. This in conjunction with the continued decline in mining investment (as the major LNG projects complete) makes the prospect of a rebound in WA unlikely.

The reasons behind the rise and fall in WA construction levels are fairly obvious. WA saw significant population growth through immigration from 2003 to 2012. Immigration is pro-cyclical, people move to where there are jobs. As a result with the end of the mining boom, that immigration has slowed dramatically. Unfortunately for WA and most notably Perth, residential developers planned on it continuing and we have had a significant overbuild. This has driven residential vacancy rates up from around 2% in 2014 to 5.1% today. 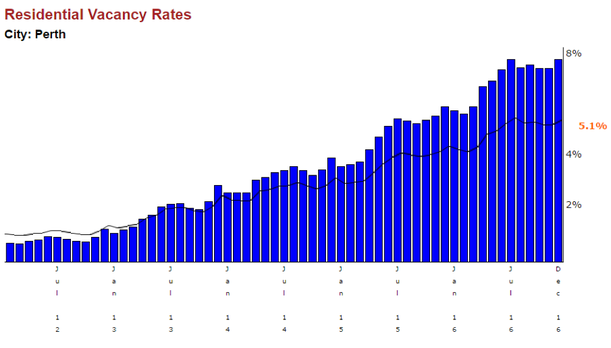 Source: SQM Research
The increased amount of rental properties has led to a significant decline in rents with house rents down 25.5% over the last 3 years and unit rents down 24.4% over the same time frame.

Source: SQM Research
The uptick at this stage has only been seen at arrears level. To a large degree it is remained out of the profit numbers to date but we’d expect this to change over the next 12 months. Whilst we have seen provisioning increase this year from all the banks, that has come through the corporate book, from this point we expect to see the increase in the much larger consumer book.

Moving on from WA, the next housing construction market that looks set to peak is Queensland and we are starting to see some familiar signs. Rental vacancy rates have jumped to 3.7% recently and have trended up for the last 4 years. 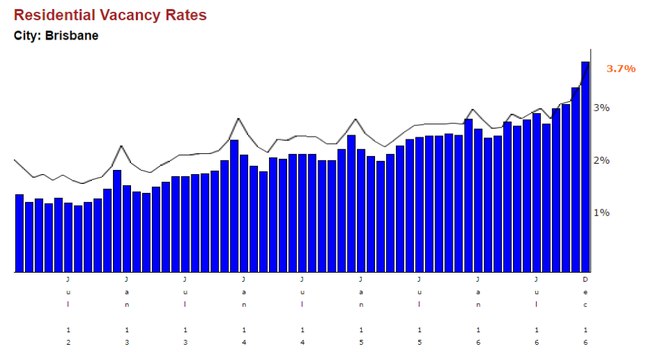 Source: SQM Research
Over the last 12 months, 5000 units have been completed within 5km of the Brisbane CBD, that supply is clearly having an impact. Looking at the next 12 months, that figure is set to double; adding significantly more supply to what appears an oversupplied market. Brisbane is therefore potentially 6-12 months behind Perth, but with the scale of building happening in Brisbane it is possible we see an accelerated trend in vacancy rates and rental falls which in turn lead to stress on landlords.

The reason for highlighting these issues within WA and Queensland is the structure of the Australian equity market means that the index (the S&P/ASX200) and a high proportion of individual investors are highly reliant on the banks. Financials represent over 35% of the index and banks comprise around 30%. The financial weight stands out significantly relative to the global index, the MSCI World.

​Couple that with the fact that the current ASX200 weight to the banking sector is without precedent in recent decades and as a result makes a poor starting point for inclusion in an investment portfolio. 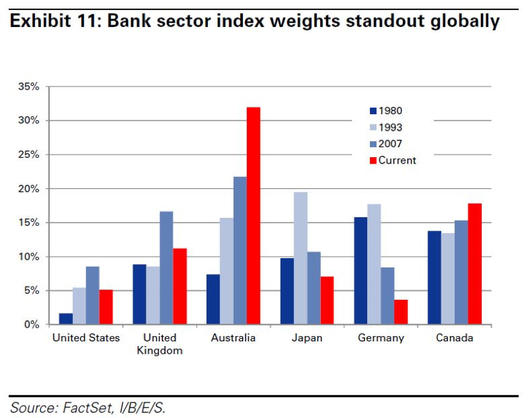 Source: Goldman Sachs
So with concerns around a sector that comprises around 30% of the index, it is our view that investors need to look elsewhere to deploy capital.  Currently our fund has a zero weight to the banks and instead invests a disproportionate amount of capital into the IT sector. 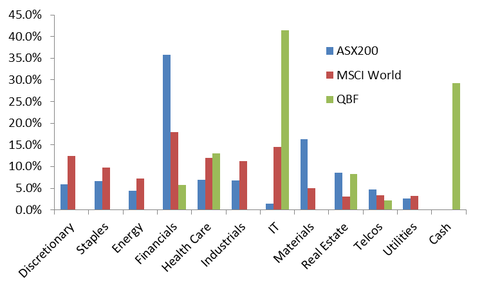 Whilst the banking sector is over-represented in Australia relative to global markets, the IT sector is severely under-represented at 1.4% versus 14.6% for the MSCI World. Given that relatively small size, it is a sector that is largely ignored by large institutional investors. This provides opportunities for those willing to investigate.

When we delve into the IT sector, we actually find a number of companies (primarily specialising in software) that are significant global players within a niche segment. These companies often exhibit many of the characteristics we look for in a quality company. In particular, they have:
Our top five holdings contain three such software companies:

Whilst these companies have come into our portfolio through our bottom up process, it seems difficult to foresee a scenario in 5 or 10 years’ time that the IT sector remains at a 1.4% weighting in the ASX. With the structural tailwinds behind technology and automation and the amount that corporations and individuals rely on it, IT is set to be one of the fastest growing sectors. However, that is a story for another time.
Happy Investing,


​The team at TAMIM
https://www.tamim.com.au