Sam, writes as a freelance journalist for The Age, Sydney Morning Herald and Australian Financial Review, was a member of the advisory board of API Capital, and teaches business finance and international finance courses to undergraduates at RMIT.
- Evidente -
GDP Contraction Belies Underlying Strength in Economy
Penned December 9, 2016

For a while now, Evidente has suggested that for the purposes of discounting company’s future cash flows, the key overreaching macroeconomic indicator that matters is nominal GDP, not real GDP. Nominal GDP represents the dollar value of the flow of production during the quarter, which captures both quantity and price effects.  Statistical bureaus measure the price effects or inflation (in the National Accounts known as chain price indexes), and from this and nominal GDP, they then back out the implied growth in aggregate volume or real GDP.  So the accuracy of the real GDP growth estimate is only as good as the estimate of the price index.

Increasingly, price indexes are becoming unreliable proxies for inflation due to the quality improvements associated with the diffusion of information and communication technologies.  Practically speaking, it is notoriously difficult, subjective and resource intensive to accurately measure these quality improvements, despite the development of hedonic price indexes.  Consequently, conventional measures of inflation have a significant upward bias.

Australia pulling out of its prolonged income recession

Evidente has long argued that the Australian economy has effectively been stuck in an income recession for the past five years, broadly coinciding with the peak in global commodity prices.  For most of the past five years, annual growth in nominal GDP has remained below 4% (see chart).

From its peak to trough, Australia’s terms of trade – the ratio of export to import prices – fell by around one-third (see chart).  The persistent weakness in growth of nominal GDP and incomes has made it a challenging environment for corporate sector profitability and government taxation revenues, particularly income tax.

Business investment has been a drag on growth for a number of years now.  The drop in commodity prices since their peak has underpinned a substantial fall in private business investment – particularly mining capex - which is 20% lower than its peak in 2013 (see chart).  This includes the pull-back in development of iron ore and oil projects, as well as LNG projects that have approached completion.

But even outside the mining sectors, animal spirits in the corporate sector have remained dormant despite record low interest rates.  The much anticipated handover from mining to non-mining capex has not transpired.  Evidente has previously drawn on analysis from the RBA suggesting that hurdle rates have remained remarkably sticky due to a lift in the expected equity risk premium, which has contributed to persistent weakness in capex.
​
A sharp drop in public sector investment contributed to the poor GDP outcome in the September quarter, but as the chart below shows, this follows a year in which it had ramped up strongly. 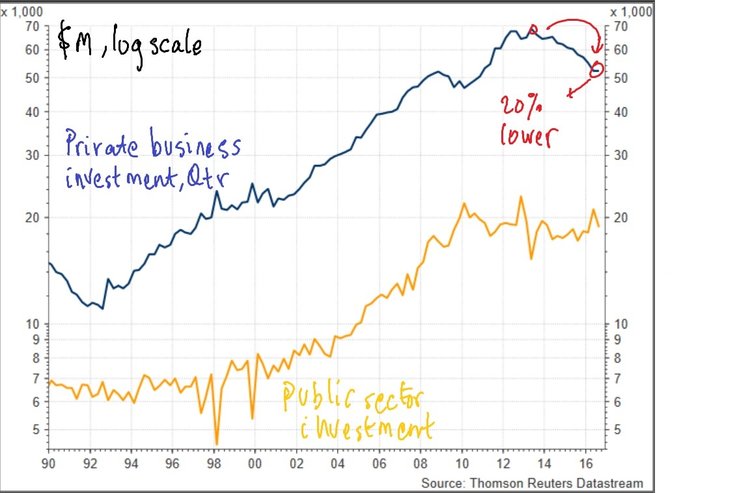 As noted above, the income recession has created a difficult environment for corporate profitability.  Consensus 12mth forward EPS estimates for the ASX200 companies remain around one-third lower than their pre-GFC peak (see chart).  Consistent with the recent re-bound in global commodity prices and nominal GDP, forecast profitability appears to have bottomed in early 2016.

to discuss how tamim can help with your investment portfolio please click here.
https://www.tamim.com.au