The TAMIM Global Equity High Conviction IMA portfolio has managed to achieve impressive results since its inception. In fact, over one and three years, the underlying fund has outperformed the major Australian based international equity funds. This week we continue our series ‘Running the Numbers’. The series aims to share with you what our VMQ framework and research is telling us about those sectors and countries that are attractive across global equity markets.
Running the Numbers
​Robert Swift
- 14 September 2016 -
There’s lots to worry about but global equity markets don’t seem to care. They have generally been on the rise, climbing “the wall of worry”, but can this continue? We get asked lots of things but these questions below are asked of us the most often.
Here are our thoughts. At the end of this article we list our favourite 5 companies. Please read on!

We think we navigated Brexit reasonably well. We picked companies with global operations that would benefit from a fall in Sterling if Leave won and benefit from “business as usual" if Remain won. We immunised the portfolio from the bad effects of making a call on one event and being wrong. We effectively created a “win-win” situation for investors.

See this price chart of HSBC for an example. June 23rd was Brexit day. We invested in HSBC. 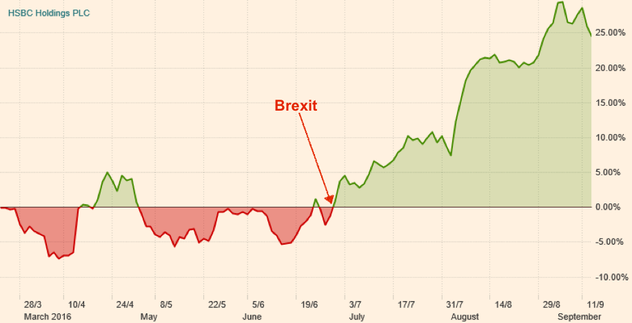 As we write this the UK Prime Minister is correctly waiting to invoke article 50 at the most opportune moment for the UK. Thus far the economic effects are minimal. We expect emotions to cool and economic sanity to prevail. The exit will not cause an economic or market panic.

We also anticipate that there will be meaningful change in the EU as a result of the Brexit vote and are invested heavily in European shares in the expectation that interest rates remain low AND we get a meaningful fiscal boost, or government spending programme. There has to be a policy designed to produce economic growth and reduce unemployment in Europe and we believe the limitations of Zero Interest Rate Policy (ZIRP) are now evident. As someone once said at an investment conference recently, “ZIRP is like filling your kettle in the kitchen by turning on a fire hose stuffed through the
front door letterbox”. A targeted fiscal programme would be more intelligent policy and produce a turbo charged equity rally.
​
With government bond yields on the floor – some are even negative – investors everywhere have bought equities that are “bond like”. These are utilities, pharmaceuticals, consumer staples and property trusts, such as National Grid in the UK, SAB Miller, the brewing company, and most property trusts everywhere. Stock volatility is low and dividends will be paid – even in a recession.

Take a look at GPT in Australia. Well managed and a safe company but is its share price rolling over? 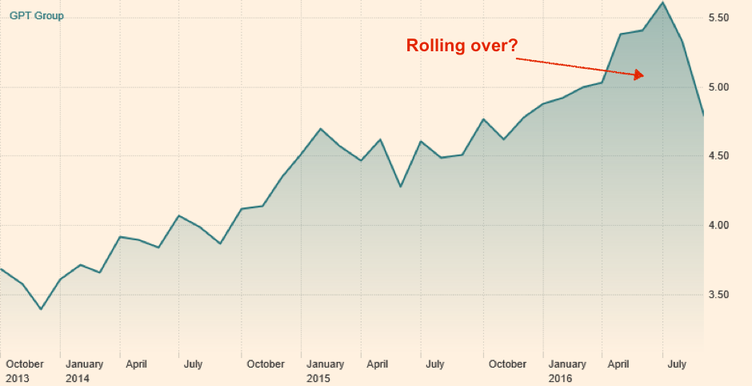 Or Snam SpA an Italian gas utility which we sold a few months back on relative valuations and a concern for Italy! 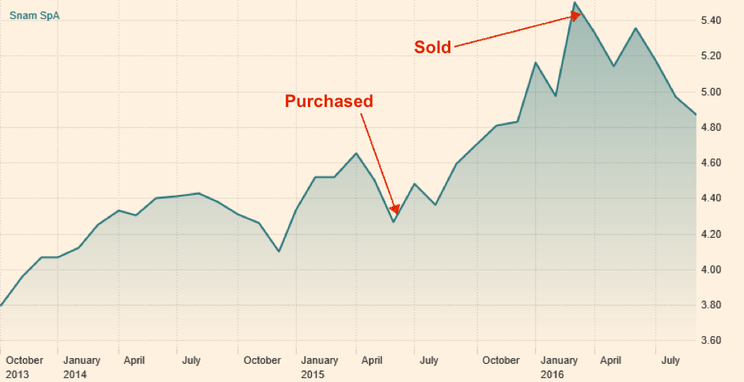 We believe that it is now “all in the price” for many of these safe stocks and that a big rotation is underway. It’s time to get braver and invest in the more economically sensitive parts of the world economy. We have been seeing earnings upgrades for sectors like Technology, Media, Chemicals and Telecom Equipment – stocks like Solvay, WPP, Qualcomm, Intel, Sky, Interserve, Bayer, Cisco, Daimler, Randstad. 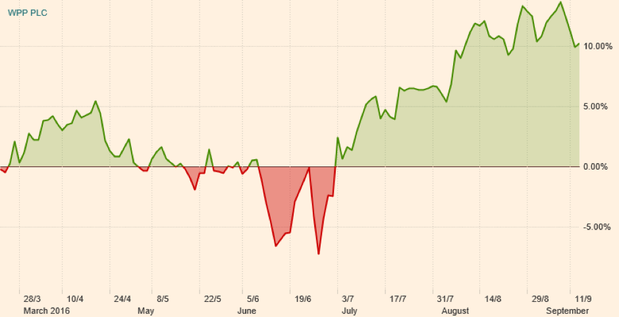 Take a look at the share price of WPP, a UK based advertising and media company, to see what happens when an unloved cyclical stock delivers on earnings.

Over the last few months we have been slowly moving the strategy to hold more Value type cyclical names like these. Managements have learned to live with sluggish revenue growth, reduce capital expenditure to essential levels and have created surprisingly strong balance sheets. These are the neglected stocks and will lead the turbo charged rally in Europe.

Now we are faced with the challenge posed by the USA election. We don’t know who is going to win although our friends in the USA have some pretty strong opinions on who they want to win.

Here is what we suggest you do as investors.

Don’t sell. Don’t panic. Don’t invest in companies which will only be ok if one side or another wins. Aim to immunise your portfolio by investing in companies that will do well regardless of who wins. We think 3 things have to happen in the USA.

We think the big beneficiaries of this steepening yield curve are banks like Wells Fargo, JP Morgan, Bank of Montreal, because their net interest margins will rise as the yield curve steepens. These banks have been hammered with fines (still are); hounded by the regulator to raise more capital; and can’t do anything unless multiple compliance teams have signed off. In short they are more like utilities now but at a cheaper P/E than the utilities!

2. USA infrastructure spending plans will become clearer. The imperative to spend more will receive political consensus – finally. I lived and worked in the USA for 12 years and revisit frequently. Anyone who has been there recently would have to agree with us that the infrastructure is not up to the required standard. It is 60 years since the Eisenhower Highways programme; 25 years since a new major airport was opened; and spending on school construction (with a rising population) needs to increase by about $270bn. Almost half of America’s public schools were built to educate the now retiring baby boomers.

If you want to have a look at USA infrastructure in general – check out www.infrastructurereportcard.org. It’s a shocking indictment.

For a quick summary of global infrastructure standards check this out. 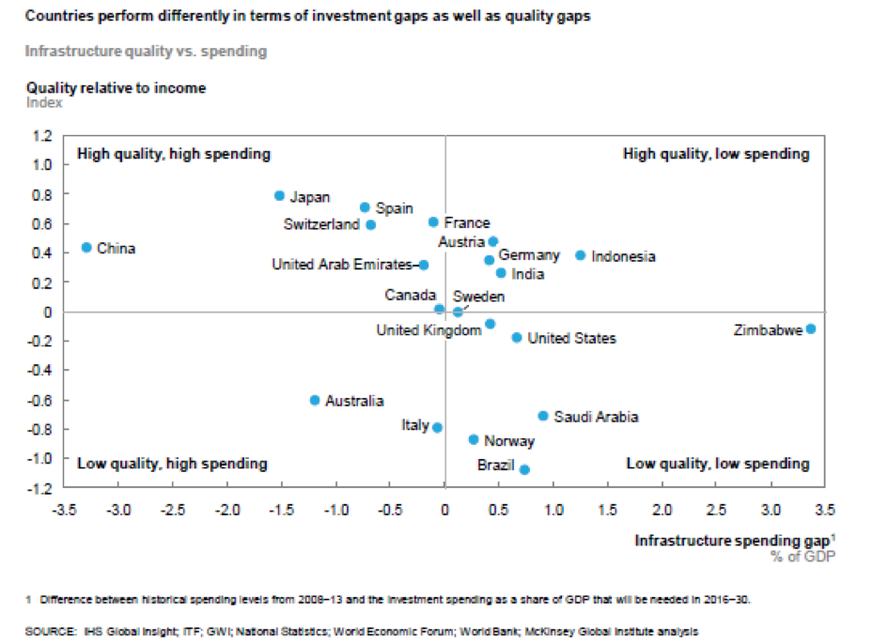 3. Innovation in technology continues and the USA maintains it's head start. We see great value in certain USA tech stocks. The PC and hardware manufacturers are changing their business models to become more ’open architecture’ and software based.

Many have new managements who will drive this change. As shareholders you will get a less capital intensive business with more flexible product lines. You can invest at reasonable P/E ratios into companies with great balance sheets and progressive dividend policies with already decent yields. The tax amnesty on repatriated offshore cash, promised by Donald Trump, is a bonus if it happens.

We are currently focussed on Microsoft, Apple, Cisco, Qualcomm and Intel but there are many more tech savvy companies available including Western Union which is a tech financial hybrid trading at a low P/E providing exposure to growing wealth in Emerging Markets.

We promised our 5 favourite holdings. If you have read this far you deserve to see them.

5. Bank of Montreal – Scores highly on our quantitative ranking model and should benefit from an increase in net interest margins as well as infrastructure spending following the acquisition of the GE equipment financing business. Much cheaper than Australian banks where you are now effectively only investing in residential real estate loans: such is the limited ambition of the Australian banks now.
​
4. Vinci – a French based construction and toll road and airport operator. The upswing in construction in Europe and the USA will now complement the stable revenues from airport operations and toll road concessions. A bit like buying Leightons and Macquarie Infrastructure but at a better price.

3. Western Union – a financial which is really a technology company. They facilitate money transfers between individuals and companies and operate globally with a physical presence in most countries and 500, 000 agents. Fabulous growth in Emerging markets where opening a bank account is becoming too hard.

2. Cisco Systems – originally provided most of the routers or physical connectivity for the global internet. Now becoming more “software savvy” with an acquisition led push into data centres, software analytics and security – all in ‘The Cloud’.

1. Fuji Heavy – a Japanese listed company that makes most of its profits from the USA car market. Trading under the Subaru brand the company makes great cars (they routinely win car rallying competitions) at a great price. Car sales in the USA have been stuck at about $17m for years and there will be a renewal cycle soon. Once incomes rise we expect a big increase in car sales, especially in the USA which is less protectionist than Europe toward “foreign” brands. A P/E of 7; a dividend of 3% and a strong balance sheet which allows for continued new model development all look good to us.

Click here to speak to TAMIM about investing in our Australian and International Equity managed accounts
https://www.tamim.com.au