Sam, writes as a freelance journalist for The Age, Sydney Morning Herald and Australian Financial Review, is a member of the advisory board of API Capital, and teaches business finance and international finance courses to undergraduates at RMIT.
Housing affordability has emerged as one of the key battle lines between the Coalition government and ALP in the lead up to the Australia's federal election.  This owes much to the ALP's policy to scrap negative gearing available to investors for established dwellings.  At present, mortgage repayments are tax deductible for all investment properties. The Prime Minister, Mr Malcolm Turnbull, has waxed and waned about whether reducing the scope of negative gearing would lift or reduce rents and house prices, but ultimately has chosen to vigorously oppose the measure.

The political heat around negative gearing reflects the fact that housing affordability has become a barbecue stopper across Australian households.  The ABC's 4 Corners program recently aired an episode which focused on the inter-generational inequity issues associated with the substantial lift in house prices.  Young people are viewed as being shut out of an increasingly expensive and out of reach 'to buy' housing market.  The program cites an IMF study which said that Australia's residential property market is amongst the most expensive in the world, based on ratios of house prices to incomes and rents.

In February, an Australian based hedge fund manager and London based hedge fund researcher gained publicity for posing as a gay couple looking to buy a house in Sydney.   They purportedly revealed evidence of lax lending standards amongst mortgage brokers and evidence of a glut of apartments in parts of Sydney, particularly the outer west.  They concluded that the growing risk of an imminent collapse of house prices represented Australia's 'big short'.  While their research approach was novel, their conclusions weren't.  Australia's major banks have been the subject of heavy short selling at times since the financial crisis by offshore hedge funds who share the view that Australia's housing market is significantly over-valued.
​
The ratio of dwelling prices to household incomes has lifted to close to record highs in recent years (see chart).  The discrepancy between the two lines in the chart below reflects the use of average household income versus median household income. 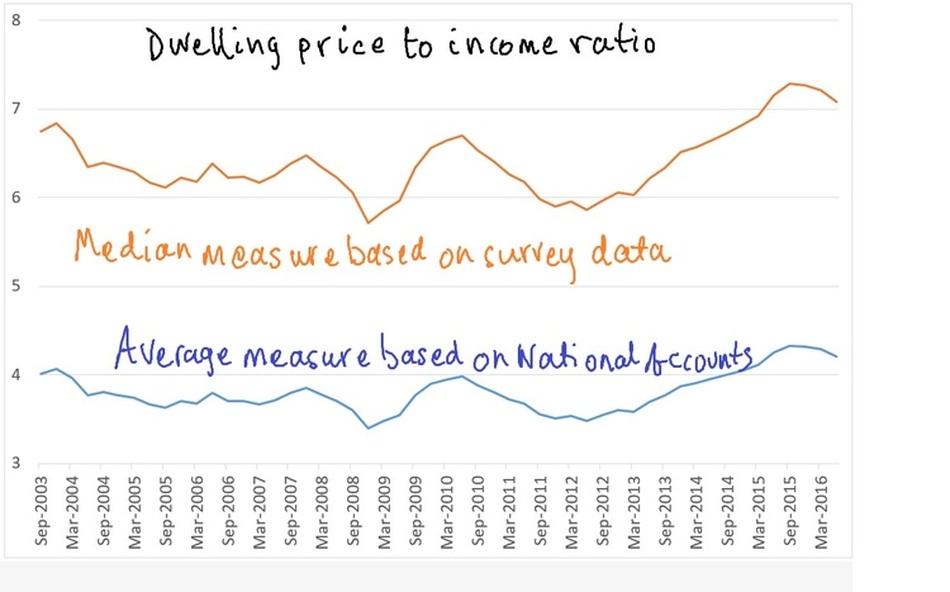 Dwelling Price to Income Ratio
Nonetheless, Australia is broadly in line with the experience of other advanced economies, except for Japan and the United States, whose low ratios make them outliers. 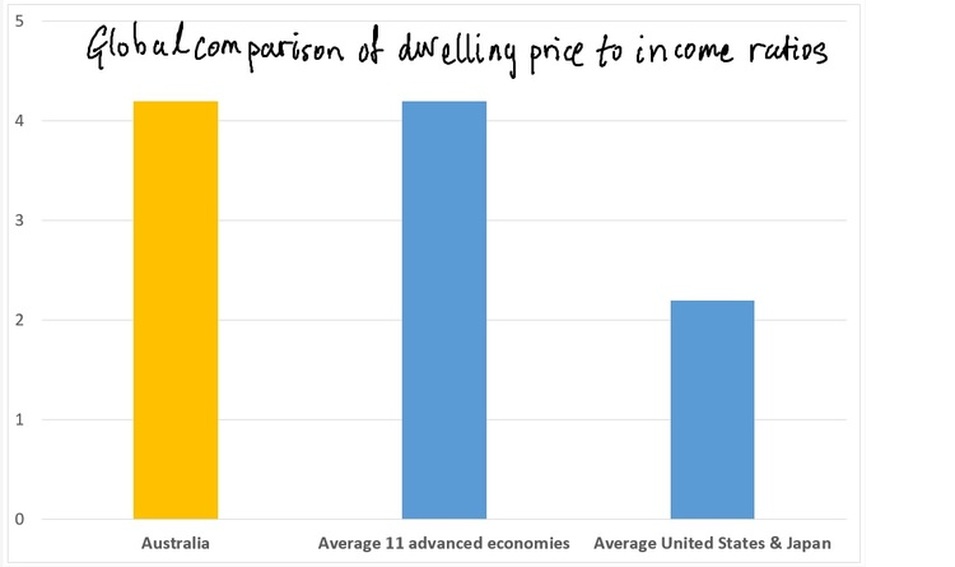 Global Comparison of Dwelling Price to Income Ratios
In a recent speech, the RBA drew attention to some key developments that have driven house prices higher in recent years; population growth (particularly immigration) has outstripped growth in the number of dwellings by a substantial margin (see chart).  In the past twelve months, conditions in residential property markets have cooled thanks to a slowing in population growth and delayed supply response to higher prices, the ongoing effects of lower commodity prices on housing markets in Perth and Brisbane, and the introduction of macro-prudential measures from APRA, which have led to a tightening in home lending standards, particularly for investors. 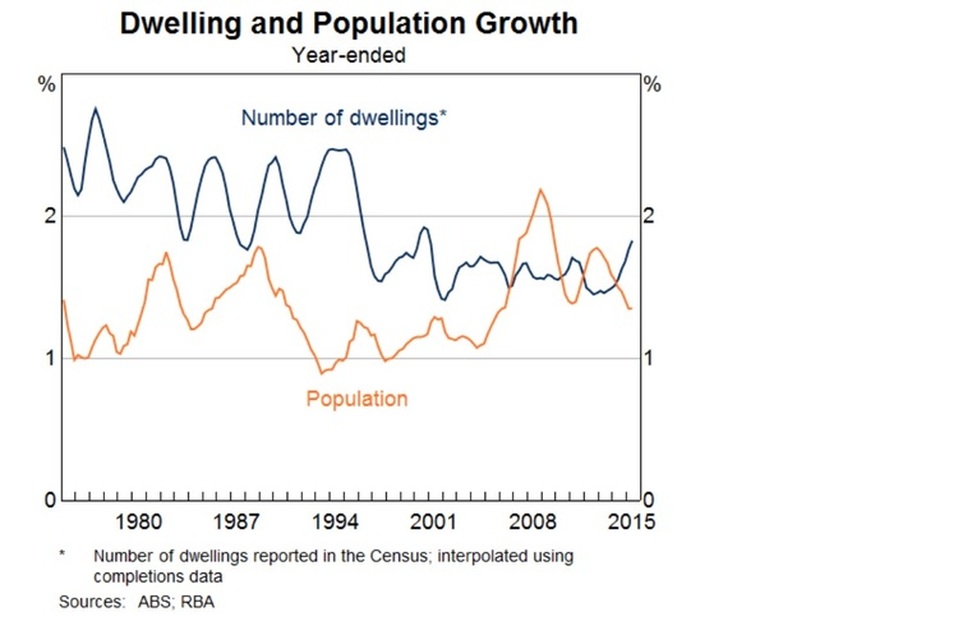 When we take a careful look, housing affordability isn't so much of a problem as implied by the ratio of prices to household incomes.  Ultimately, the size of mortgage repayments rather than the 'sticker shock' price governs housing affordability.  On this measure, the situation looks far more sanguine thanks to record low mortgage rates (which the major banks reduced by a further 25 basis points over the last few weeks in line with the RBA's cut to the Official Cash Rate).

Following the cut to official interest rates to a record low, Evidente calculates that that the repayment on a new housing loan has fallen to 26.3% of household disposable income, well below the record high of 33% plus in 2007 and lower than the average of 27.6% since 2003 (see chart).  This is based on the required repayment on a new 80% loan-to-valuation ratio loan for the nationwide median priced home.  Certainly compared with the credit boom years of a decade ago, it is now easier for the typical household to buy the typical home. 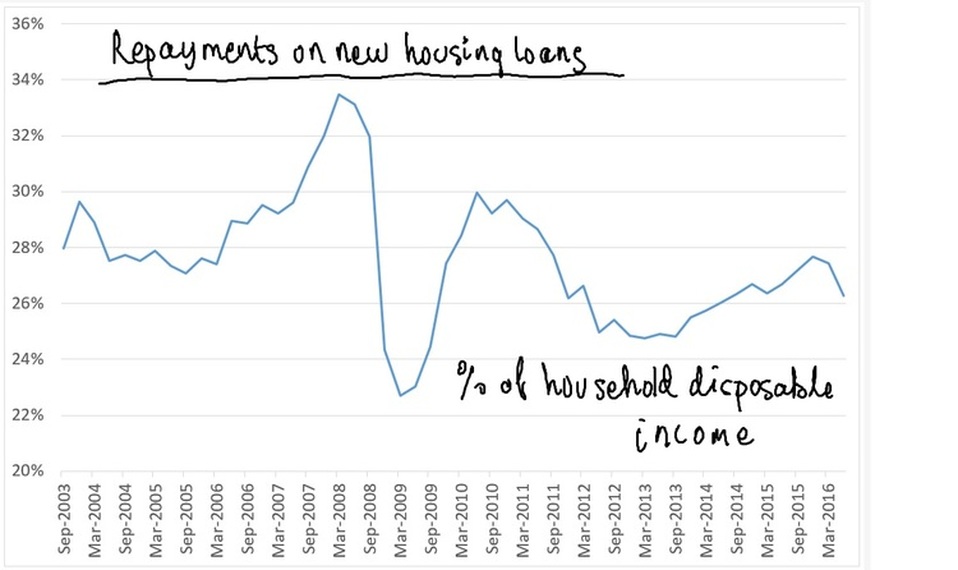 Repayments on New Housing Loans
Evidente has previously suggested that if there was a bubble in Australia's residential property markets,  it might well persist for quite a bit longer due to an extended period of low interest rates and concluded that hedge funds seeking to capitalise on Australia's 'big short' would need an abundance of patience (and capital).  The analysis here confirms there is no crisis in housing affordability and that the 'big short' is a myth.
If you are a sophisticated investor and would like to discuss how tamim can help with your investment portfolio please click here.
https://www.tamim.com.au