The Pain Report provides you with a weekly independent and objective commentary on the global economy, in an attempt to help you identify the key forces which will shape the world in the years ahead. For example, I believe that the most significant and defining economic phenomenon of our time is the rise of the Asian middle classes. I urge you to beware the prism through which you view the world, and to be aware that much of the western media’s negative and sensationalist coverage is biased against the so-called emerging nations. In my view, the decades ahead will see an era of prosperity, enlightenment and opportunity that very few today are predicting. If any of the above resonates with you then please read "The Pain Report".
What a week we have had here in The Land of Oz.

The RBA cut interest rates and slashed its forecast for inflation.

The answer to both questions is NO.

Last week I wrote the following and do not have too much more to add.

In addition it is worth noting that the so-called core rate (the average of the weighted median and trimmed mean), at 1.55%, was the lowest on record. Whilst declining food and fuel prices were a significant factor in the surprise decline, it was interesting to note the weakness was pretty much across the board. I’m not going to dwell on this subject for too long, and hasten to emphasize that it is only one data point, but it no doubt suggests that the RBA’s next move is to cut rates. Is it next Tuesday? That’s a 50/50 call in my view and potentially impacted by the ‘Budget’ being announced at 7.30 pm the same day. The more important point to me is that the typically ‘Pavlovian’ Australian response to declining interest rates of borrowing even more, will not happen this time.

Simple: Australians already have far, far too much debt. Furthermore, lower interest rates in Australia will not stop the fall in house prices that we are now seeing in every city. It will also not stop the banks cutting dividends and will do nothing to stop the tightening in credit conditions. Evidence of which we now see daily. You know my views on the Australian housing market, and that will do for now.

My medium to long term view is that ALL the major banks will cut their dividends in the next 12-18 months. I do of course concede that in a lower, for longer, interest rate world, Australian bank dividend yields are relatively attractive. But, I question the sustainability of these attractive yields. The better question, I believe, is how much of the bad news is already in the price? To attempt to answer this we need to take a look at the charts.

ANZ.AU daily share price chart
What is particularly noteworthy is that ANZ rallied sharply following the ‘surprise’ cut in its dividend. Was this a classic case of ‘sell the rumour and buy the fact’? How much of this bounce was driven by those dastardly hedge funds covering their very profitable shorts?
We will never know, but I suspect they played a role.

Let’s now take a step back from all the ‘sound and fury’ of the past week and try and get a sense of the bigger, technical picture of the Australian markets. First up the ASX 200 Banks Index 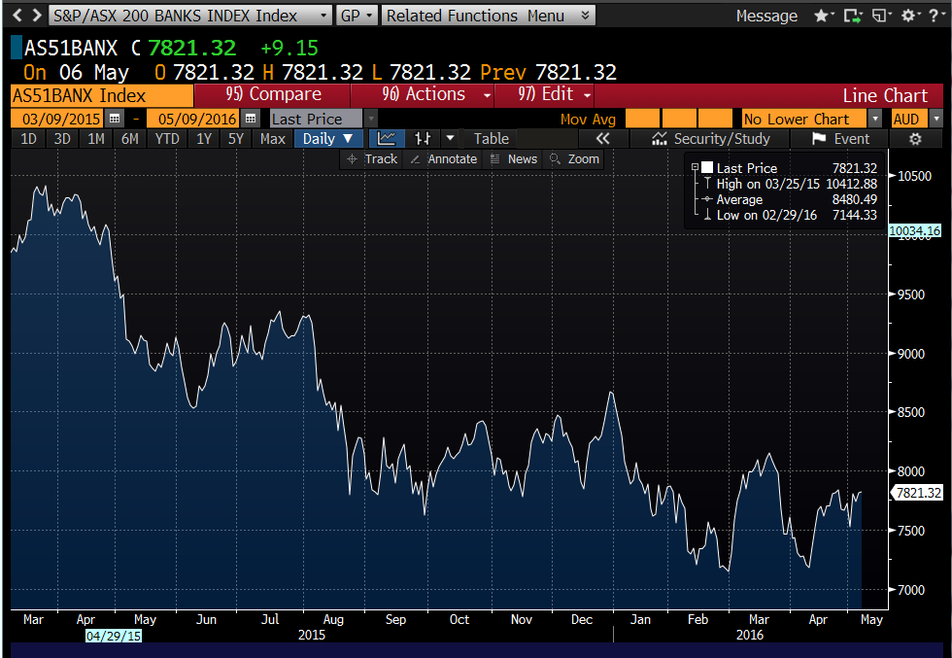 S&P/ASX 200 Banks Index
Even a bank bear such as myself would have to say that a double-bottom is evident in this chart, and given how far we have fallen, we could easily rally to levels near 8,500. 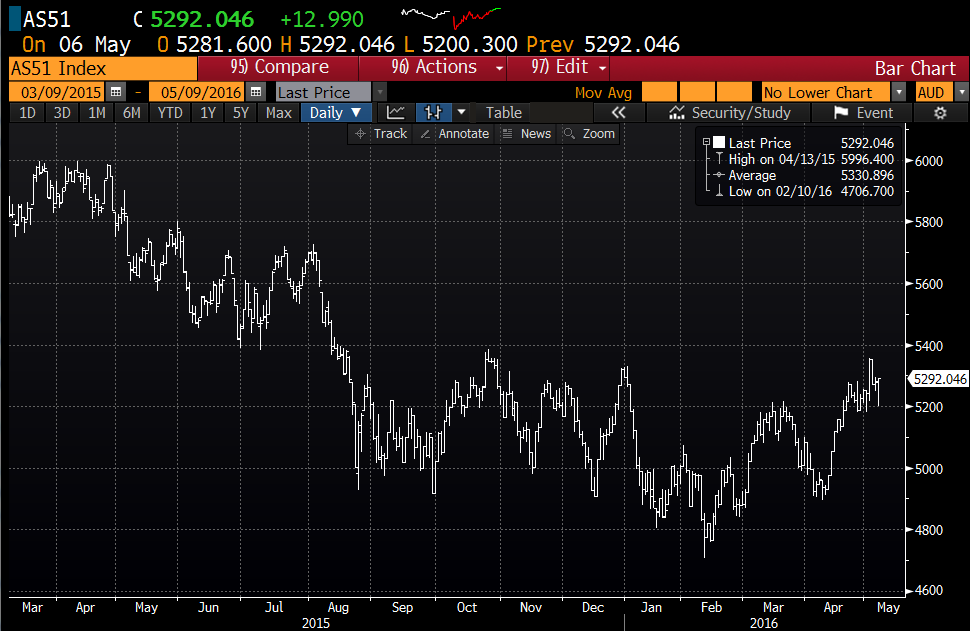 S&P / ASX 200 Index
This chart tells me that the ASX 200 wants to move higher, as we test the upper bound of the post August 2015 range. And if it’s going to do so, now seems a good time, given all the RBA induced euphoria prevailing in the market. In addition, the RBA is one of the few semi-major central banks, in the developed world, with any monetary ammunition left.
Personally speaking I am going to sit this one out and feel the better risk/reward trade here is to be short the A$, which I am. 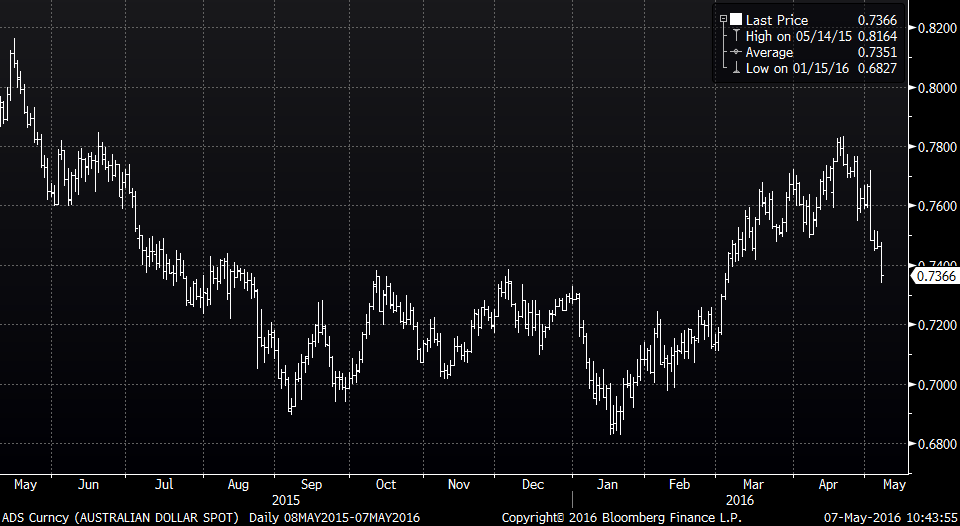 AUD/USD spot rate
​Prior to the RBA meeting, my son David, spent an hour trying to convince me that they would cut. I was in the 50/50 camp. We both agreed that the best way to play it was through selling A$.

Let’s turn our attention to the United States. It’s probably surprised you as to how long it’s taken me to get to Trump! And, it will surprise you even more that all I am going to say is, it's Trump versus Clinton! We have a long way to go before November, and boy oh boy, am I looking forward to it.
​
Let’s take a look at the S&P 500. 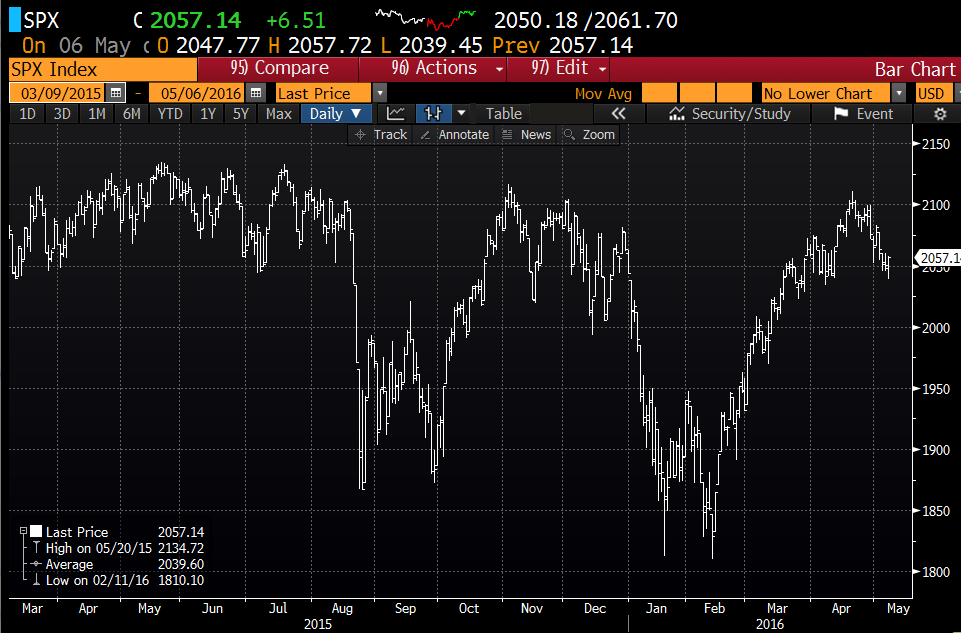 S&P 500 Index
In the interests of full disclosure, and to reveal my obvious bias, I am currently short the S&P 500. When you look at the above chart I hope you can see why. Suffice to say we are at a critical juncture in markets, and we have just seen two consecutive weekly declines in the S&P 500, which we haven’t seen since the February low.

An interesting week lies ahead.
If you are a sophisticated investor and would like to attend a lunch presentation with jonathan please click here.
https://www.tamim.com.au