The Pain Report provides you with a weekly independent and objective commentary on the global economy, in an attempt to help you identify the key forces which will shape the world in the years ahead. For example, I believe that the most significant and defining economic phenomenon of our time is the rise of the Asian middle classes. I urge you to beware the prism through which you view the world, and to be aware that much of the western media’s negative and sensationalist coverage is biased against the so-called emerging nations. In my view, the decades ahead will see an era of prosperity, enlightenment and opportunity that very few today are predicting. If any of the above resonates with you then please read "The Pain Report".
I have a large red book in which I write all my notes, observations et al for my weekly commentary. This week, just the highlights went for pages.

It is probably best to start with the ‘Mother of them all’, the S&P 500. We’ll then take a look at the data which got us where we are. Because the market is still ‘data dependent’, even if the FED isn’t. 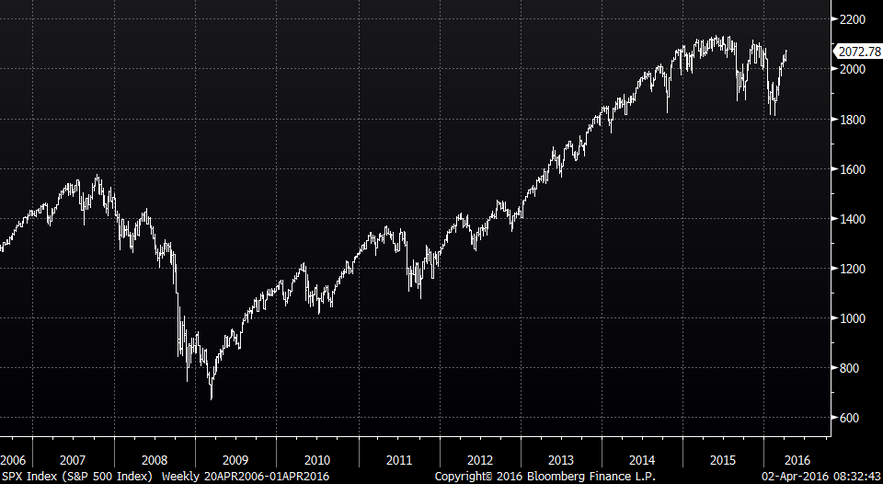 S&P 500 Index (Weekly)
Let’s take a closer look at this and focus on the SURGE since 11 February.

Lets quickly get through the deluge of data, most of which was very positive, with the notable exception of Japan. Then again Japan has always been an exception, in every respect.

The chart below profiles the US data we had last night. Please make particular note of the new orders number at the bottom of the page.

ISM New Orders
The chart below provides some context to the improvement. 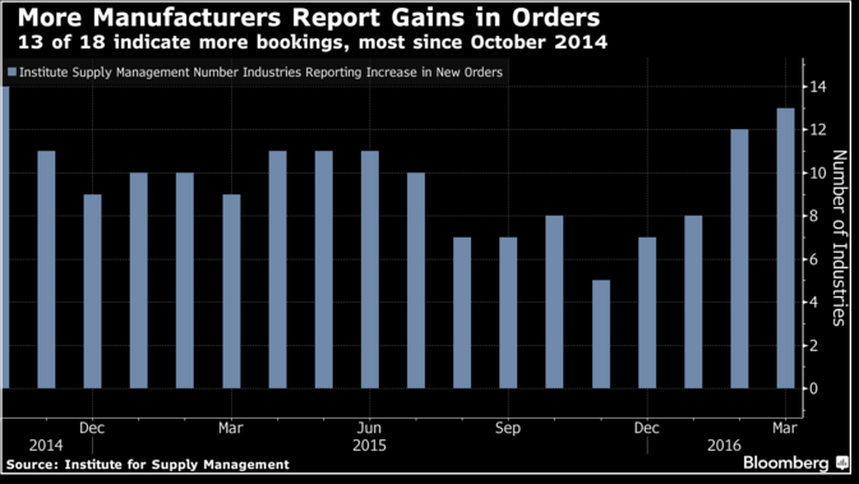 ISM Number Industries Reporting Increase in New Orders
Remember all the talk in January that the US economy could be heading for a recession this year. Fortunately I did not share that view, and said so at the time. This time my concerns lie in the east, not the west. Turning to the east, and China in particular, we, however, saw a healthy rebound in one of the market’s favourite economic indicators. (see top line below)

Chinese Manufacturing PMI
In fact it was the first time we had been above 50 since mid 2015. Coupled with the stabilisation in the Chinese currency, this further served to soothe the so-called China fears. Sadly the same could not be said for Japan.

Japanese March Tankan Business Confidence Survey
​Japan’s March Tankan Business Confidence Survey made for dismal reading and begs the obvious question. What on earth will lift this economy if the most stimulatory monetary policy in history cannot? And following the report we had commentary like this below, which pretty much sums up the situation.

And perhaps the Japanese 10 year bond yield says it all. 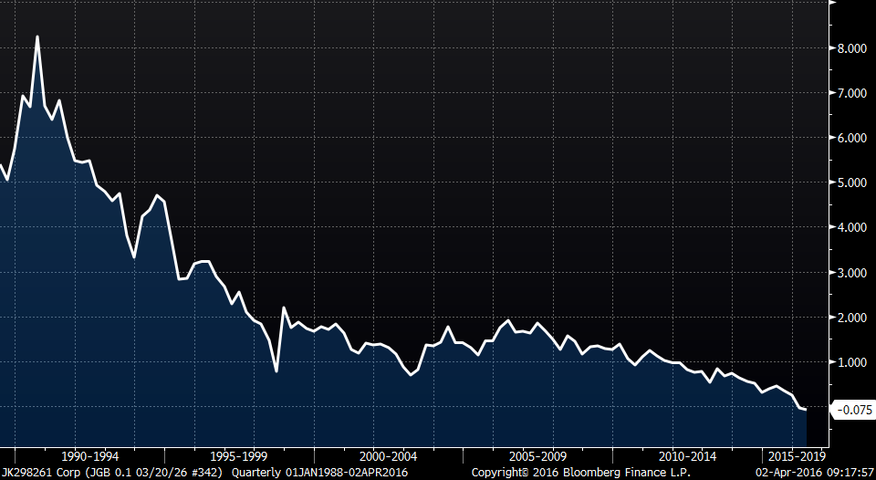 10yr Japanese Government Bond
​If I was teaching economics I would simply show the chart above, with the word, ‘discuss’.
This rather conveniently leads me to a very important issue which is at the ‘core’ of my medium term concerns. I have said for some time now that I believe we have commenced the deflation of a global credit bubble, particularly in the east, and yes Australia is in the east.

We started our discussion this morning with a chart of the S&P 500, and the historic surge in prices that we have seen. Lying beneath the surface, however, is the continuingly dismal performance of bank stocks around the world. Let’s start with Japanese banks. 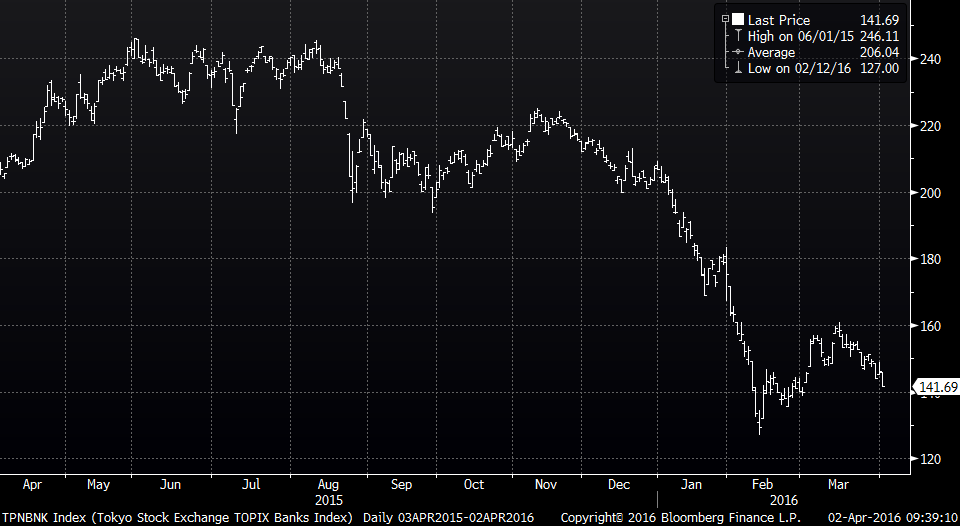 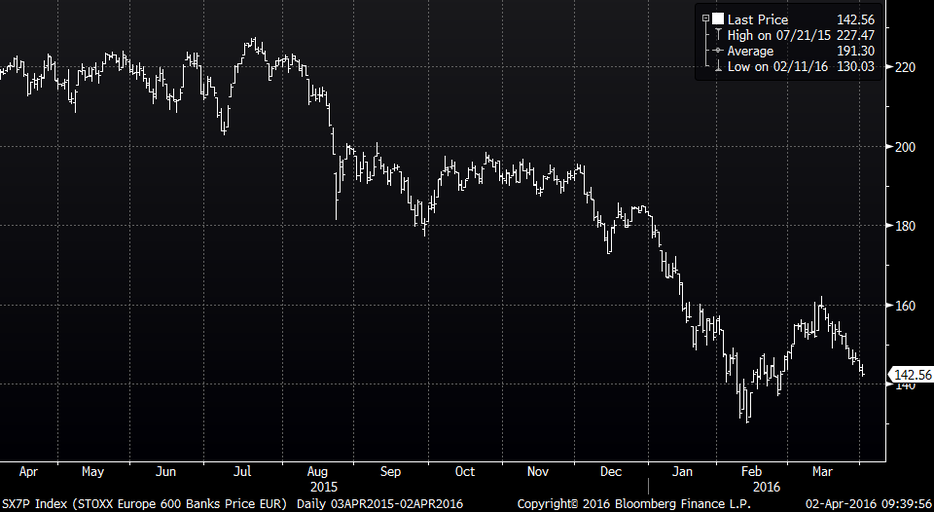 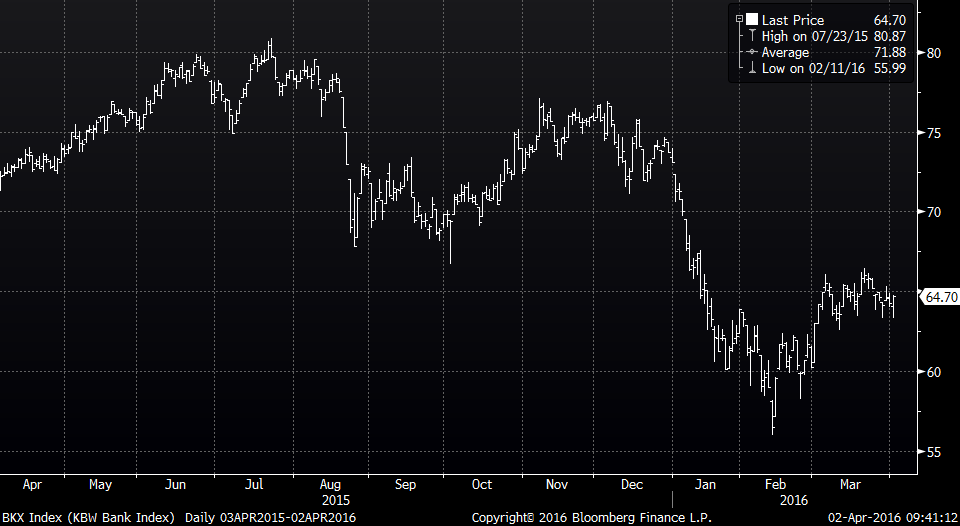 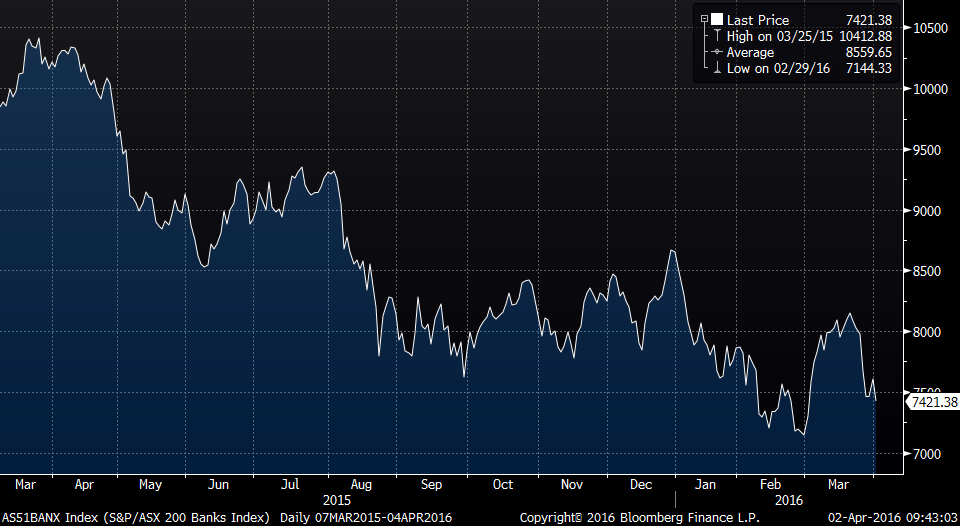 S&P/ASX 200 Banks Index
​The pattern and profile of the inexorable decline in global bank stocks is staring you in the face. Whether you are a bull or a bear, the charts above SHOUT loud and clear that there is a problem. That problem, in my opinion, is that we are witnessing the deflation of a global credit bubble. Here is an abbreviated list of some of the challenges that banks face:In some countries it is worse than others. In those countries where the banks have the highest exposure to real estate, the problems will be the most painful.

The fourth paragraph is interesting given the preceding three paragraphs, but I’ll leave you to make up your own mind.
All eyes on 2134.72, and if you don’t know the significance of this number you have not been paying attention. We may get close BUT I would start getting defensive right now.
There is a huge wall of resistance ahead in the S&P 500, and the US market is wildly overbought, that much is obvious. The trend is no longer your friend and the Australian equity market shows unmistakeable signs of ‘rolling over.

This week I am attending the Third National Meeting of China Matters www.chinamatters.org.au and very much looking forward to it. I sit on the advisory council, but unfortunately all sessions are Chatham House rules, so won’t be able to share too much. But I know, and so do you, that the South China Sea will be an interesting discussion point, as will Chinese FDI in Australia. I am then away until Tuesday 12 April.

​So you will be pain-free until then!