The Pain Report will provide you with a weekly independent and objective commentary on the global economy, in an attempt to help you identify the key forces which will shape the world in the years ahead.  For example, I believe that the most significant and defining economic phenomenon of our time is the rise of the Asian middle classes. I urge you to beware the prism through which you view the world, and to be aware that much of the western media’s negative and sensationalist coverage is biased against the so-called emerging nations. In my view, the decades ahead will see an era of prosperity, enlightenment and opportunity that very few today are predicting. If any of the above resonates with you then please read "The Pain Report".
My goodness there is a lot to talk about. When I started this weekly version of The Pain Report I envisaged writing a snappy, relatively brief update. That, it seems, is impossible. There is simply far too much going on to be snappy, so please forgive me.

Incidentally, and before I get lost in the maze of markets, you are allowed to circulate my weekly without my permission...a number of you have asked...thank you.

I know many of you will want to talk about Donald Trump and also that ‘sizzling’ Australian GDP report, and perhaps even the overnight non-farm payroll report. We will. But before we do let’s look at the charts and see for ourselves how impressive and powerful the ‘bounce’ has been.

Two weeks ago, on Saturday 20 February, I wrote:
“In times such as these I rely on the charts. Listen to what the market is telling you.They are looking forward, not backward.
Right here and now equity markets look like they want to move higher. Not surprising given how far we have fallen. The two charts below (Dow Jones Transportation Index and the Russell 2000, tell me that markets want to go higher) Don’t forget it was these two markets which led the broader indices lower.” 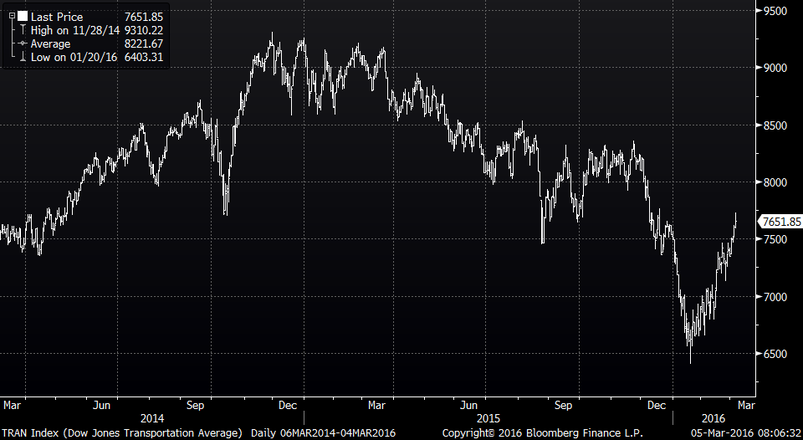 Dow Jones Transportation Index
That’s a 19.55% rally from the low! In fact at its high this morning, it was up more than 20%, which qualifies as a bull market, and all in a matter of weeks. The Russell 2000 (US small cap stocks) has seen a similarly explosive rally. 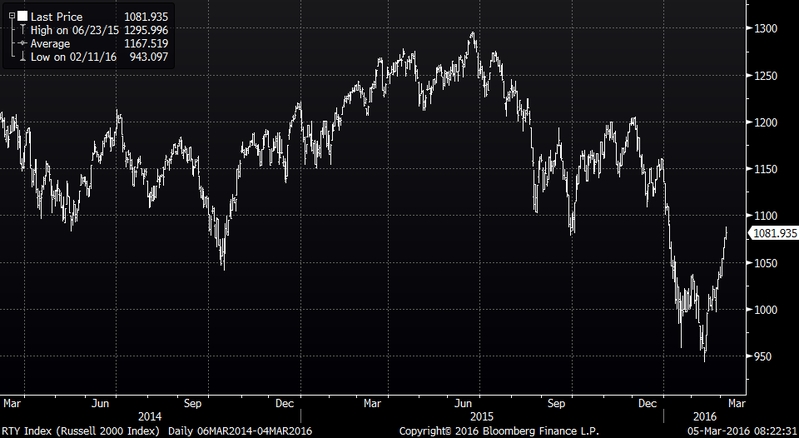 Russell 2000 Index
But if you’re talking explosive, then take a look at the Brazilian market. 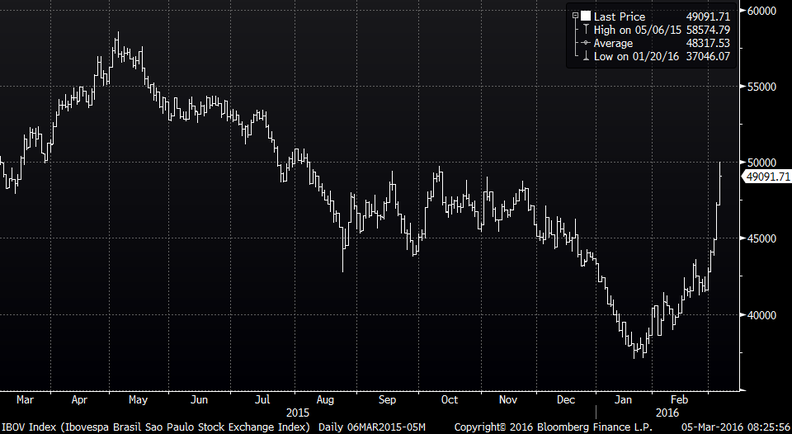 Ibovespa Brasil Sao Paulo Stock Exchange Index
So what happened in Brazil? The former President Lula da Silva was arrested, and on 3 March we found out that Brazilian GDP shrank 3.8% in 2015. If the consensus 2016 forecast for GDP of a further decline of 3.5% turns out to be right, then back-to-back declines of that magnitude would amount to the longest and deepest downturn since Brazil began keeping records in 1901, yes worse than the Great Depression. You see it’s not so much the numbers themselves that are important, but the way that the markets react to them that is important. The market’s reaction tells you about market positioning and hence investor sentiment. In Brazil, investors were short.

C’mon JP I don’t give a fig about Brazil, what about the rally in Aussie banks? 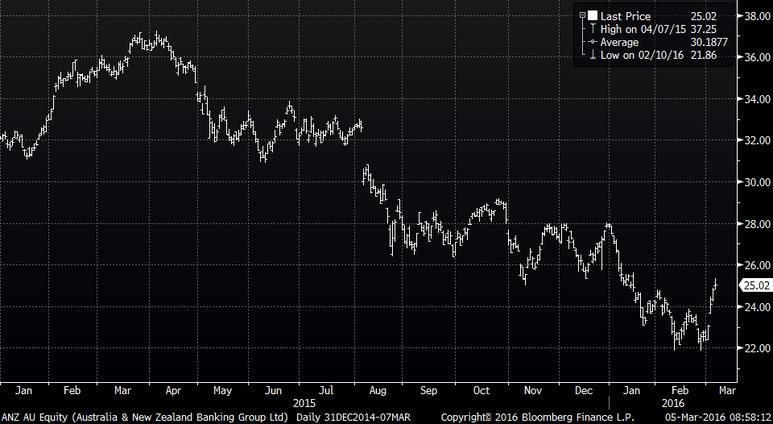 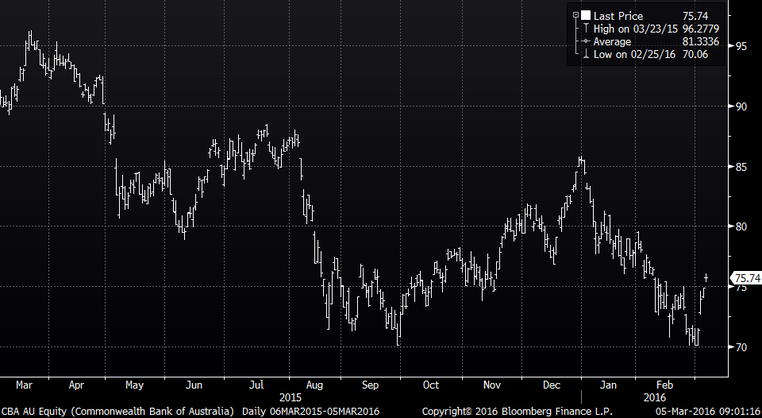 CBA.AX Share Price
And we’ve still got Donald and ‘sizzling’ Australian GDP to talk about! The suspense is simply overwhelming.

Earlier in the week I stayed overnight on the central coast of New South Wales, about an hour or so north of Sydney.
For those not resident in Australia it looks nothing like South Wales. I decided to leave early in the morning for Sydney, so as to beat the traffic, at about 5.15 am. I got stuck behind a big truck going up a hill. I won’t tell you for how long because it is embarrassing. I couldn’t overtake. It was pitch black and a bit foggy. Poor visibility and all that. But the real reason I chugged up the hill doing no more than 25 km/h was the MASSIVE volume of traffic hurtling along in the outside two lanes. Once or twice I indicated and tentatively nudged out to overtake and a hundred ‘utes’ instantly hooted their indignation. I was a condemned man, trapped in the slow lane, a hostage to the ‘multiplier effect’ of the Sydney housing boom. Electricians, bricklayers, carpenters, builders, plumbers, carpet layers...all hurtling to the great building site we call Sydney. How many people are involved in the construction and sale of a single property then multiply that by 100,000 or so? New houses, new ‘utes’, new tools, new clothes and the ‘multiplier’ begins. Napoleon Bonaparte once said that Britain was a nation of shopkeepers. Australia has become a nation of real estate agents. The banks, the property industry and all the homeware/hardware companies, the construction industry and maybe the fund managers too have all become ‘agents’ of the real estate industry.

It is of course impossible to quantify the full value or multiplier effect from housing.

Some of you will recall my view that America was experiencing a housing and construction bubble in 2005 and 2006.
I said then that America had gorged at the trough of debt for far too long and that they could not forever defy the laws of economics. C’mon JP you can’t compare the Australian housing market with America. And I’m not, and I don’t need to, because the average SINGLE house price to average SINGLE income ratio is, as you know, far, far greater in Sydney than it was in San Francisco, Miami, Stockton, Dallas, Chicago, New Orleans, Memphis or New York. Now that house prices are declining we can debate how far they will fall. We can indulge ourselves in all kinds of statistical wizardry and dismiss declines in median house prices and publish ‘hedonic’ measures that look so much more palatable. A footnote here is worthwhile: CoreLogic published its monthly report showing Sydney home values rose 0.5% last month. CoreLogic, however, also said that the median house price in Sydney in February was $730,000, down from $776,000 in January and much lower than November’s $810,000. Hedonic measures, as you all know, adjust for the changes in the ‘quality’ of the houses in the survey sample.

Let’s stop all this nonsense. The fact is house prices are declining. The sensible debate is about how much further  they will decline. If you accept they have fallen about 10% since  September 2015, which you probably won’t, then they have in my view about another 20% to go. That’s all I’m saying for now, and as time goes by I reserve the right to say it might be more. The more important issue I believe is how much of a correction in housing construction will there be? Or put another way, when will I be able to overtake that truck without being run down by ‘utes’. Looking at the chart below of  ‘Australia building approvals total building value’, you can see that it appears to be rolling over. You hopefully will also see that I have overlaid a 12 month moving average as the data series is ‘lumpy’ to say the least.

You will also see that we have been here before, back in 2009, but the 12 month moving average looks like it has peaked. This suggests to me, all things being equal, that the economy slows significantly through 2016 and into 2017.
Which brings me to the ‘sizzling’ Australian GDP report. The Australian economy grew 0.6% in the fourth quarter of 2015 and 3.0% over the year. These figures were much stronger than anticipated. In terms of the contributions to quarterly real GDP they were as follows:
And for the eagle-eyed amongst you, there was a ‘statistical discrepancy’ of +0.1% to make it all add up to + 0.6%.
So what have we learned so far, and I am keen to get to Donald, Household consumption was strong at +0.4%, comprising two thirds of the growth in the quarter. Also, that the government sector contributed 50% of the real GDP growth in the fourth quarter. In addition we saw a continuation of the ‘national income recession’ with ‘real net national disposable income’ declining by 1.1% in 2015. A trip to the Australian Bureau of Statistics is in order and in the words of the ABS.

A broader measure of change in national economic well-being is Real net national disposable income. This measure adjusts the volume measure of GDP for the Terms of trade effect, Real net incomes from overseas and Consumption of fixed capital.

So to bring our Australian GDP discussion to a close, the best is now behind us and the tailwinds have turned into headwinds, and I’ll leave it there for now.

Now finally to Donald Trump. Donald Trump will win the Republican nomination BUT he will not win the presidential election. He does indeed create good theatre and in an age of social media and bumper sticker headlines he is an extraordinary phenomenon. In the eyes of his adoring fans he can do no wrong. They believe that he will ‘make America great again,’ and that’s all they care about. What that actually means is that we(America) will do whatever we want, whenever we want, to whomever we want. I will leave you to fill in the blanks as to what this means. But let’s be clear on a vital point, the forthcoming election in November does matter. You may not know the name of the Belgian Prime Minister, but everyone knows who the President of the United states of America is. Because it matters who the Commander in Chief of the world’s most formidable military machine is. Yes, I know, the thought of Donald and Sarah in the Oval Office together is not funny...but it won’t happen...

Next week I want to write about Saudi Arabia.

But, before then lets wrap up this longer than anticipated weekly with some thoughts about markets. Across the board you have to be impressed with the price action in markets. Can we go higher still? Of course we can. Perhaps up to the 200 day moving averages across the major market indices. In Australia this means levels on the ASX200 of about 5240.
The trend is your friend. Do I still see a deleveraging taking place across Asia? Do I still see deflationary winds blowing in from the east? Yes I do. I never subscribed to the views of a recession in America and stated that view here in previous reports. The Chinese have stabilised the RMB, for the time being, but will depreciate it further down the road. The oil market has stabilised, in fact oil prices have soared. Sovereign wealth funds have stopped selling for now. So global equity markets having crashed and being very oversold, have now rallied sharply. I have been buying Australia and Japan, for the first time in a long time. But this is not a set and forget market. In conclusion I would use this rally to lighten any overly concentrated positions you may have.

Have a great weekend.

PS The PM of Belgium is Charles Michel

​PPS Non-farm payroll rose a stronger than expected 242,000 and yes the US economy is doing fine.