The Pain Report will provide you with a weekly independent and objective commentary on the global economy, in an attempt to help you identify the key forces which will shape the world in the years ahead.  For example, I believe that the most significant and defining economic phenomenon of our time is the rise of the Asian middle classes. I urge you to beware the prism through which you view the world, and to be aware that much of the western media’s negative and sensationalist coverage is biased against the so-called emerging nations. In my view, the decades ahead will see an era of prosperity, enlightenment and opportunity that very few today are predicting. If any of the above resonates with you then please read "The Pain Report".
Let’s sit back, relax and enjoy the pictures. Global equity markets had a good week. In fact mid-week the S&P 500 strung together its best 3-day winning streak since October 2011. And talking of 2011 quite a few investors think that the current decline in equity markets is analogous to that period, which we remember as the depths of the eurozone sovereign debt crisis. (see chart below) 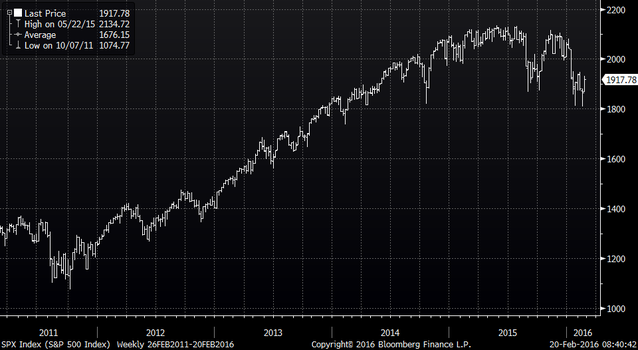 S&P 500 Index
I wish I could feel that way too. Do you think the current environment is like 2011? I’m sorry I don’t. In fact everything, and I mean everything, is different. China was doing just fine. Emerging market companies were happily borrowing lots of money and hadn’t yet borrowed too much. The ECB hadn’t yet launched QE and Kuroda hadn’t yet arrived at the BOJ to launch the biggest shock and awe monetary campaign of all time. The FED was aggressively easing policy. Since 2011 we have had a Chinese stock market crash, an oil market and commodities crash and Donald Trump...to mention just a few! I think the “its 2011 all over again” cheerleader squad have lost the plot and are clutching at straws, and that there are simply too many differences to mention. You see the simple and stark reality is that it really is DIFFERENT THIS TIME. And yes I know those are loaded and emotive words for all of us in the investment industry, but, really, you have to agree we have never been here before. We have no roadmap, well, no monetary roadmap. This time investors appear to be losing faith in the central bank’s ability to influence markets. Just look at the reaction of the market to the BOJ move to a negative rate and the subsequent strengthening in the YEN, post Jan 28. 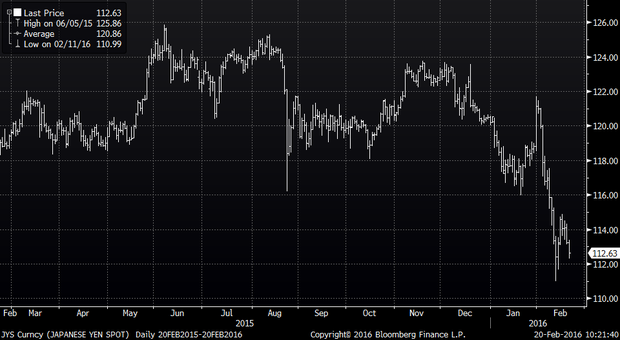 Japanese Yen Spot
And, as I have mentioned in previous weeklies and The Pain Report, look at the performance of bank stocks in Japan (first chart below) and Europe. 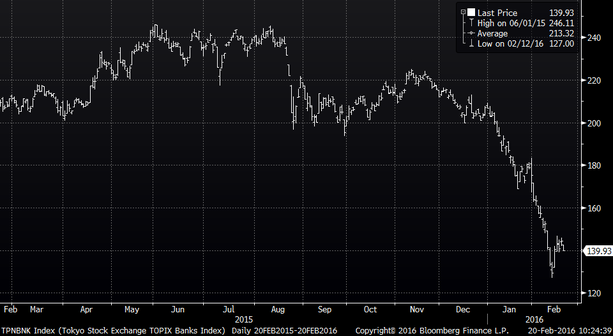 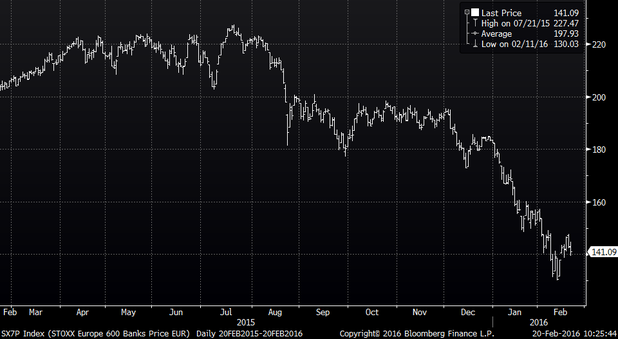 Stoxx Europe 600 Banks Index
These charts, as I have mentioned before, are telling me that the ‘hissing’ sound you can hear is the deflation of a global credit bubble.
Now let me be very clear, as there is much discussion of late about the prospect of a US recession. I do not see a recession in America this year. I also believe that the US banking system is fundamentally sound, in fact I think it is very robust, unlike in 2007/2008. I also do not believe that the crash in oil prices, and the indebtedness of oil and oil related companies, pose any kind of systemic risk to the US banking system. Most of the risk is held outside the banking system in various credit funds, ETFs and the like. I do recognise the weakness in the industrial and manufacturing sector in America, BUT the US consumer is in pretty good shape...ditto the housing market looks fine. Having said all of that the US economy will not set the world on fire with sparkling economic performance. Quite the contrary, growth will be about 1.5% to 2% this year. The problem THIS time is not in America. THIS time the winds of deflation come from the east, and not the west. Stuck in the middle we have Europe. We have a migration crisis, we have a bad debt problem in Italy, we have issues in Portugal and yes we also have issues in Greece...but really, who cares about Greece anymore? The recovery in Europe is young and fragile and the bank stocks are suggesting some trouble ahead, nothing systemic as yet, but the problems in the east could not have come at a worst time. Keep an eye on European truck sales...as you know my favourite economic indicator. And talking of economic indicators, and to make things even more complicated...oh boy...and they are complicated...I feel that we have a data integrity problem across much of the world. We all know the China story and the integrity of the GDP figure, but here in Australia, we have the nonsense that the ABS issues each month in the employment report. Then there is the mother of all economic statistics, the US employment report. In times such as these I rely on the charts. Listen to what the market is telling you. They are looking forward, not backward. Right here and now equity markets look like they want to move higher. Not surprising given how far we have fallen. The two charts below (Dow Jones Transportation Index and the Russell 2000, tell me that markets want to go higher)
Don’t forget it was these two markets which led the broader indices lower. 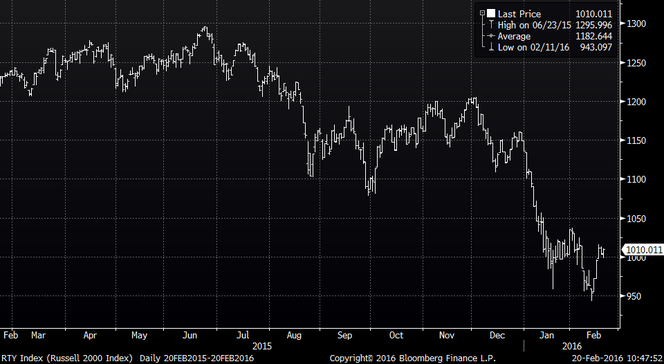 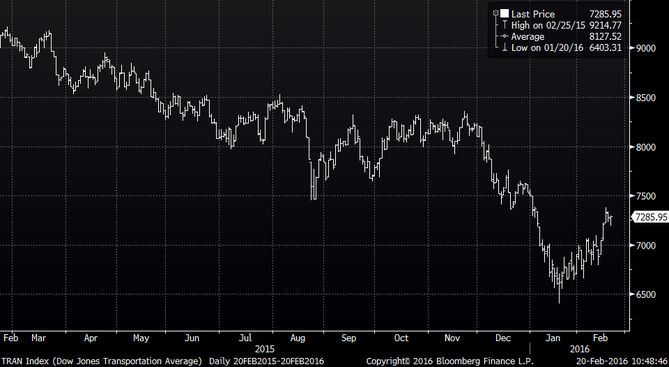 But both these markets could move a lot higher and still be in a downward channel. So, to try and sum up, the short term trend is higher, but the long term trend is lower. Also, worth mentioning that the Chinese appear super-determined to defend the YUAN and most importantly we at long last heard from PBOC Governor Zhou. Many say that part of the problem in markets is the lack of communication by Chinese policymakers. In the west, particularly in America, a day does not go by without a FED official saying this or that. In China we can go months without any comment from the PBOC. Well, Governor Zhou has spoken with a long and detailed interview in the Caixin Weekly and his message was LOUD AND CLEAR, don’t mess with my currency!! Just let me devalue it quietly...he didn’t say that bit! All in all financial markets appear to be stabilising and the ‘chatter’ of an imminent Chinese devaluation is fading.
And on that note I am fading too...have a good weekend.

Click here to discuss the views of the Pain Report with a TAMIM Director
https://www.tamim.com.au