Markets are always made up of at least 2 opposing views. This is what makes markets what they are. Trying to come to a price through the discovery of existing and new information and factoring all of this into future cash flow projections is what makes financial markets. That is why the team at TAMIM is passionate about what we do, we love the intellectual pursuit of finding out information that perhaps the market has not yet figured out. We use this knowledge in putting portfolios together. Because we know that different investment methodologies will work in different market environments, we work with a number of managers across a number of investment styles and asset classes, this allows us to always have a solution for the current investment environment.

European banks are in free-fall. The Stoxx 600 Bank index is down 42.5% from its high on the 20th of July 2015 to the low on 11 February 2016.  This is largely driven by concerns over the ability of Central Banks to support markets globally. Mario Draghi’s policy of more and more quantitative easing is not working. Europe’s banking system is fundamentally weak. There is not enough capital supporting the mountain of debt on the banks’ balance sheets. In addition to this the ongoing weakness in oil prices causing worry about banks exposure to oil and gas corporates and the weakness in emerging market debt emanating from China continues to make the situation worse. 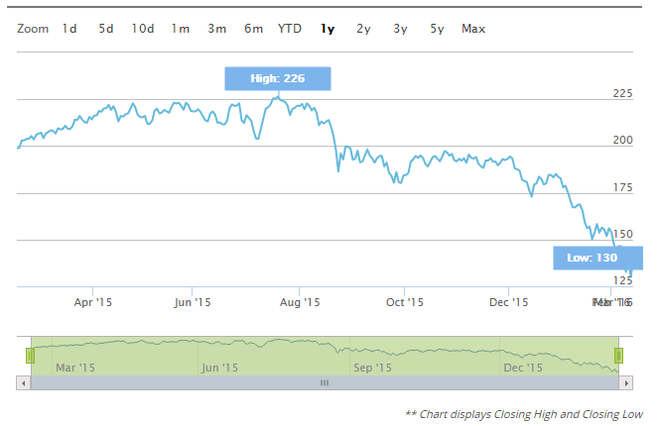 source - www.stoxx.com
On the surface, Australia’s banks are much stronger. But our love affair with residential property has resulted in housing dominating the asset side of banks’ balance sheets (as we all know, house prices never fall!). On the liability side of the balance sheet, it is believed that banks have a large reliance on offshore borrowing which to be fair is partially offset by a large and stable domestic funding base. The liquidity pressures on the global banking system mean that the cost of financing these liabilities will rise. The ASX Financials ex A-REITs index has fallen 24.9% since its peak on the 20th of March 2015 to the low on 12 February 2016. Is there more weakness to come. It is interesting to note that there is divergence in this index with CBA down 27.1% at is low (it has since recovered) while for example ANZ is down 41.3% from its high. 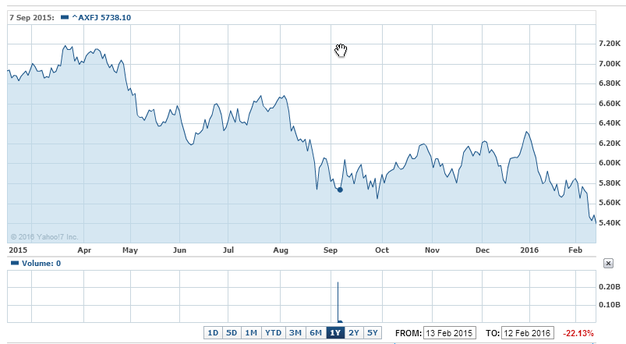 source - au.yahoo.com
Given the above global and local movements there has been a lot of commentary on the banks recently so TAMIM has done its research and has the following Bull and Bear summary of the issues for you to consider.

The Bear View
The Bull View 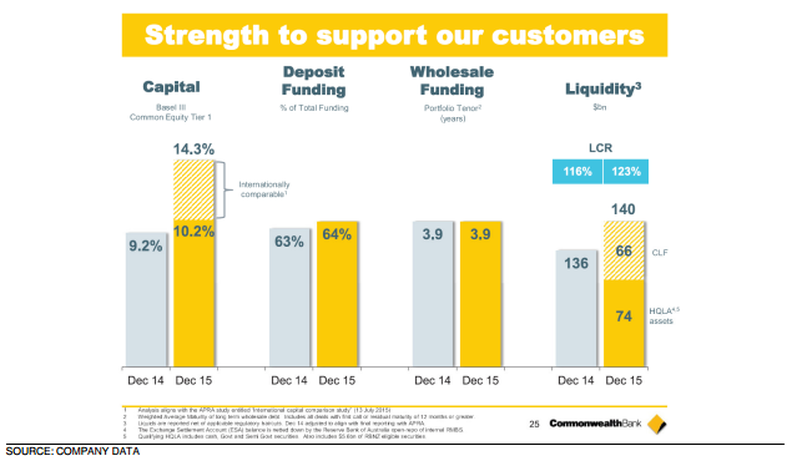 ﻿
Should you own, buy or even sell the banks. The case can be made for all 3 situations and we believe the answer will largely be impacted by your circumstances and especially your time frame of investment. The recent correction in banks has vividly illustrated the risks of running portfolio's that have a high level of concentration to 1 sector. In this case, the banks. It is even more important to be aware of this concentration risk when holding the banks because as Australians we are also highly leveraged in most cases to the property market. As always, consider both side of the argument, safe investing from the team at Tamim.
for help with your investments through these volatile markets please click here.
https://www.tamim.com.au